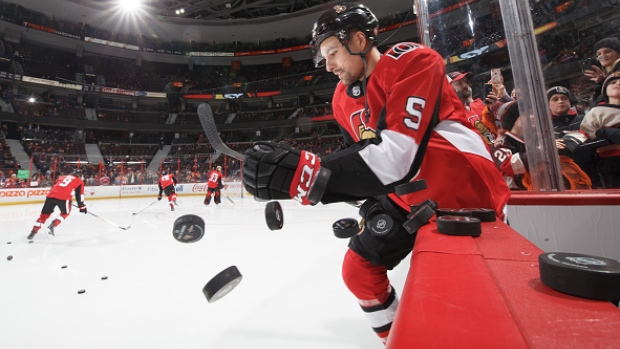 St. John’s, N.L. – Being traded from his hometown Ottawa Senators to the rival Toronto Maple Leafs last summer was odd enough for Cody Ceci, and he’s expecting the reality of his Leafs' debut during Wednesday's preseason tilt in Ottawa to be equally strange.

“I’ve been going [out] the last six years and playing for the Sens and everything was kind of normal. It’ll be weird now, definitely,” Ceci said after the Leafs’ team meeting on Wednesday at Mile One Centre. “Going into preseason you’re never too nervous, but I’m definitely feeling a little bit nervous, especially going back home and playing in front of friends and family on a new team. It’ll be a little different.”

Fortunately for Ceci, he's unlikely to be the only player feeling disoriented.

In the July 1 deal that brought him to Toronto, the Leafs also acquired defenceman Ben Harpur, while shipping Nikita Zaitsev and Connor Brown to the Senators. Harpur and Brown are expected to also suit up for their respective teams on Wednesday, as will former Leafs’ defenceman Ron Hainsey and forward Tyler Ennis, both of whom joined Ottawa as unrestricted free agents over the summer.

"There are a lot of [our] guys that will be playing ex-teammates as well, so it’ll be weird for all of us,” Ceci acknowledged. “And it’ll be good to just get it out of the way. You just have to go out there and enjoy it.”

That’s the same approach Ceci has applied while transitioning directly into a top-four role with the Leafs, paired up alongside Morgan Rielly. Viewing his role as a stay-at-home defensive presence to complement Rielly’s more offensive-minded game, Ceci is out to prove he can handle the pressure of a top-pairing job and leaning on his previous familiarity with Rielly.

The blueliners have been friends for years, first meeting in 2011 as part of Team Canada at the U-18 world championship tournament, and going on to be first-round picks in the 2012 NHL Entry Draft (Rielly went fifth to Toronto, Ceci went 15th to the Senators).

“He’s just very talented; I’m lucky to be playing with him,” Ceci said of Rielly. “He’s a good skater and reads the play very well. He likes to get up in the play and take some chances. I’ll have to do a better job of staying back and protecting him when he’s up there and getting the puck out of the zone quickly and letting him do his thing offensively.”

While Rielly and Ceci came into the NHL around the same time, their career trajectories have taken different directions.

In Toronto, Rielly has established himself as the Leafs’ No. 1 defenceman in recent years, while Ceci was struggling in Ottawa, producing 45 points (12 goals, 23 assists) in 156 games over his last two seasons, with a minus-49 rating.

In trading for the 25-year-old and signing him to a one-year contract, Toronto is hoping a change of scenery will revive Ceci’s game.

Even with their off-ice relationship, Rielly knows breaking in his new partner won’t be easy, but he can see their potential to succeed in the long term.

“He’s a good defender and he’s got good size, so I think it’s going to work well,” Rielly said. “We’re just going to have to work at building some chemistry and learning how to work with one another. He can really move well, moves the puck well, so hopefully given some time we can work on things and get going in the right direction.”

Wednesday’s exhibition game will be the first step in that journey for Ceci, a chance to trade training camp scrimmages for live-action hockey and apply what he’s learned so far. Regardless of the outcome in Ottawa, Ceci has confidence in a bright future ahead for him and the Leafs.