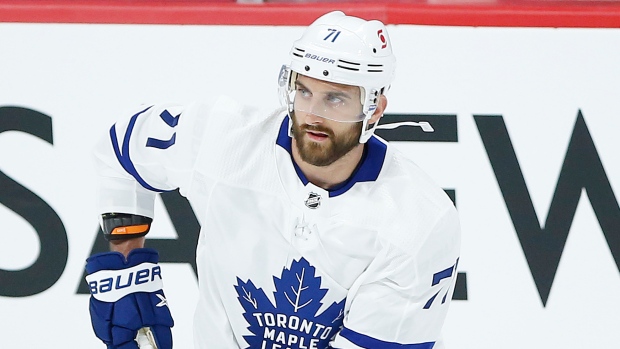 The Maple Leafs held an optional skate at Bell MTS Place on Saturday.

For a guy who only joined the Leafs on Wednesday night, Nick Foligno has made a big impression.

"He's just a competitor and fits in perfectly already," said goalie Jack Campbell. "It feels like he's been in the room for a while."

Foligno gave a speech to his new teammates before Thursday's game expressing how excited he was to wear the Maple Leaf.

"It really helps shorten that transition period when you've got a guy with that level of character and confidence, personality," observed coach Sheldon Keefe. "All those things were really evident even in our meal room when we got here to Winnipeg. Just seeing how comfortable he was right away is excellent."

The 33-year-old former Blue Jackets captain is comfortable in his own skin. And despite being fresh out of quarantine, Foligno made an impact on Thursday's game by throwing his weight around and helping the Leafs defend a lead in the third period.

"You can just see the presence he brings," noted centre John Tavares. "His experience and value in key situations...just got a good sense of himself and his game and has [fit in] tremendously even just a couple days in and feeling himself out in the locker room."

Foligno is only the latest veteran addition made by the Leafs. Joe Thornton, Wayne Simmonds and Zach Bogosian were signed in the off-season.

"It probably didn't get talked about enough last season just how young our team was," Keefe pointed out. "That puts even more onus on players like John, but giving him more help this season is great."

Creating a team of leaders – Thornton wore the 'C' in San Jose while Bogosian is fresh off a Stanley Cup win with Tampa Bay – has helped insulate Tavares, who is more reserved and often leads by example.

"It's been tremendous," said Tavares. "The more the better."

Thornton, Simmonds and Bogosian have all been lauded for using their voices on the bench and in the room. Former Senators captain Jason Spezza is also helping in that regard.

"When you add guys that have been captains and have seen a lot and been through a lot and are really talented players and know how difficult it is to win, it's a great opportunity for me to learn," said Tavares, "and also rely on these guys and their leadership abilities and the way they can inspire the group and help me."

It seems to have taken some pressure off Tavares. Early in the season, the 30-year-old struggled to produce offence consistently in five-on-five play. Keefe heaped praise on Tavares for his defensive improvements, which helped set the tone for a team that was looking to do a better job overall in that regard.

Tavares is plus-11 this year after finishing minus-seven last season. And now the offence is starting to come. Tavares has 15 points in the last 10 games, including a nice assist on a Simmonds goal Thursday night.

"He makes some incredible plays out there," said defenceman T.J. Brodie, another veteran addition to the Leafs this season. "He's so skilled and his vision, it's a treat to watch."

Tavares insists he and linemate William Nylander are not doing anything differently these days as the points start flowing.

"We're just continuing to play and stick with it," he said. "Obviously, we've had some stretches [where] we haven't got the results, but our commitment away from the puck [has remained]."

​Campbell will look to stay perfect in Winnipeg tonight as he starts again for the Leafs. He is 3-0-0 with a .948 save percentage in the Manitoba capital this season.

Thursday's performance was important as it snapped a personal three-game winless skid for Campbell, who admitted afterwards he’s learning to not be so hard on himself. Campbell is still adjusting to the heavier workload. During his time with the Kings, the 29-year-old always knew Jonathan Quick was the No. 1 guy.

"If you saw this guy after practice, it looked like he just got back from a war," recalled Jets defenceman Derek Forbort, who played with Campbell in Los Angeles. "He's just nuts like that. He's just a great team guy and he'll stay in and take a million shots after practice. That's just kind of the weird goalie in him."​

But now the games are coming fast and furious for Campbell, who has less practice time and less time in general to regroup between games.

The Leafs will look to make his life a bit easier tonight after a couple defensive breakdowns contributed to goals on Thursday.

"Being cleaner on the break outs," said Brodie of the top priority in tonight's rematch. "That will help us a lot. We played so well in the other areas. I think if we do that, that will give us a chance to play in the offensive zone more."

Adam Brooks will play in a third straight game for the Leafs tonight.

"He has been incredible," Keefe gushed. "He has played well in every game that he has played in the NHL going back to last season. I thought [Thursday] was his best. He made plays on offence when he had the puck. He skated with confidence. He competed defensively. He was in really good spots. I trusted him and his line to really play against anybody because of how they were playing. Against a team like Winnipeg, to have that faith is significant."

Keefe applauded the 24-year-old centre, who played a critical role in the Marlies' Calder Cup win in 2018, for staying patient. Tonight will be his fifth game with the Leafs this season and 12th overall in the NHL.

Brooks believes he's benefited from playing on a line with Thornton and Spezza.

"I'm confident in my smarts and my ability to read the game and just be in the right position," the Winnipeg native said. "It’s real easy to play with Spezz and Joe. I know if I go out there and work and try to be on the right side of pucks things are going to go well for our line."

"Playing with those guys, I think they give you a lot of confidence," Keefe agreed. "Both Thornton and Spezza talk constantly — on the ice, on the bench, in the dressing room. That helps young players with their confidence. But we can't take anything away from Adam here with his own development and his own maturity."

Brooks has scored two goals in four games this season.

Ilya Mikheyev is listed as a game-time decision tonight. The winger has missed the last two games with an undisclosed injury.

Projected lines based on Friday's practice: