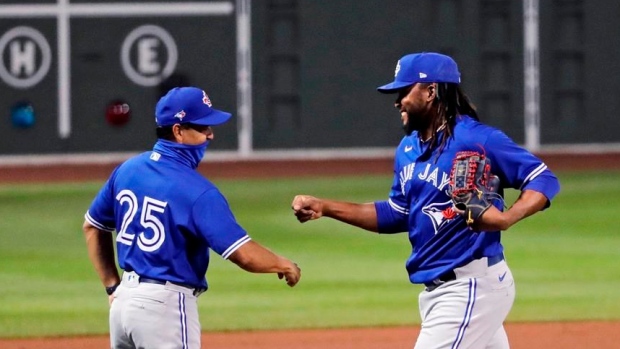 Some baseball teams have a defined closer role. Others go with a committee approach.

For Toronto Blue Jays manager Charlie Montoyo, it has been a combination of the two. He started the 60-game season with the former and plans to continue using the latter for the stretch drive.

Incumbent closer Ken Giles was the clear ninth-inning option until a right forearm strain forced him to miss almost seven weeks before his return last week. Montoyo primarily turned to Anthony Bass or Rafael Dolis to close games with Giles out.

"That's what I like about my bullpen this year is that I (didn't) really have a defined guy after Giles got hurt," Montoyo said. "Which means you can use them in high-leverage (spots) whenever you need to.

Last Friday, Giles gave up a run and had two strikeouts in a one-inning stint during a blowout loss to the New York Mets. Montoyo hopes Giles can build up to high-leverage situations and eventually be available on back-to-back days.

With Toronto virtually assured a post-season berth, Montoyo can use the next week or so to see how Giles fares in different situations.

One of the top closers in the sport, Toronto acquired Giles two years ago in the Roberto Osuna trade with the Houston Astros. Since then, he has converted 38 of 39 save opportunities entering Tuesday's road game against the New York Yankees.

The six-foot-three 210-pound right-hander led the major leagues in save percentage (95.8) last season after converting all but one of 24 opportunities. Giles also led the American League in strikeout rate (39.9 per cent) and was third in earned-run average (1.87).

Multiple back-end options is a good problem to have for Montoyo, who's in his second year as Blue Jays skipper.

Dolis and Bass have been reliable anchors for a bullpen that entered Tuesday's games ranked fifth in the majors with a 3.66 ERA and sixth in strikeouts with 216. Canada's Jordan Romano was also a strong setup man before going down with a finger injury two weeks ago.

"I do like the way we're doing it right now, not really having a closer," Montoyo said Tuesday on a pre-game video call with reporters.

Giles has said he'd like to eventually return to his usual role but understands the need to build up and see how his arm feels. Dolis, an off-season free-agent signing, and Bass, a waiver wire pickup, seem comfortable in any spot.

"It's all about communicating with them and just being ready," Montoyo said. "Being ready any time from the sixth (inning) on and we can use you. They've known that from the beginning.

"We've been doing it since Giles got hurt and they're fine with it."

The bullpen could become even deeper in the coming days. Nate Pearson and Matt Shoemaker are scheduled to throw live batting practice on Wednesday and their potential relief roles have yet to be determined.

Romano, from Markham, Ont., is making strides but it's unclear if he'll be back before the season finale on Sept. 27. Montoyo said Romano — who he called his "big horse" — has started playing catch at 90 feet.

This report by The Canadian Press was first published Sept. 15, 2020.