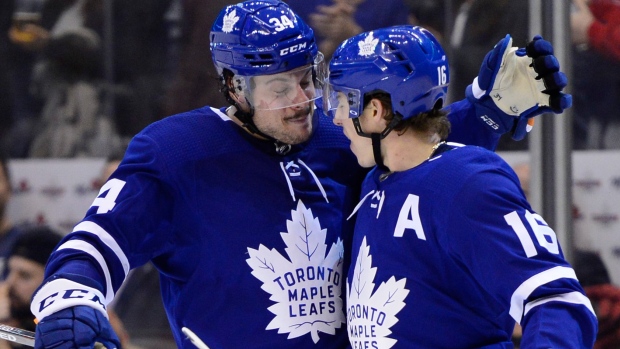 TSN Toronto reporter Kristen Shilton checks in daily with news and notes on the Maple Leafs. The team held an 11 a.m. team meeting at Scotiabank Arena, ahead of facing the Edmonton Oilers at 7 p.m.

In the brief spurts that Auston Matthews and Mitch Marner have been linemates the last three seasons, they’ve often expressed a desire to see the partnership continue longer.

That hope has become reality under head coach Sheldon Keefe, and the partnership is proving to be an offensive success. In their first six games on a line with Zach Hyman, Matthews and Marner have already combined for 14 even-strength points.

“[There’s] just a lot of chemistry,” said Keefe after the Leafs’ team meeting on Monday, ahead of facing the Edmonton Oilers. “Just the way they're feeding off each other [stands out]. I think Auston has been able to find space to get available and get dangerous shots, and Mitch finds him really well. The chemistry has been really good in that sense.”

Keefe had a feeling that would be the case when he paired the two forwards together, sliding Marner away from his long-time centre John Tavares on Dec. 23. That was eight games after Marner returned to action from nearly a month away with a high-ankle sprain.

“He's done extremely well for us, especially since coming back from injury,” Matthews said. “It's been great [playing together]. …He's competitive, wants the puck on his stick, wants to make plays and wants to help the team win, so it's always a blast playing with him.”

Despite the early returns from their new-look line, Matthews does see room for improvement.

“I think just holding onto the pucks down low and making sure that we're making smart plays in the offensive zone [will help],” he said. “And switching sides when we can and just holding onto it, so we can play more offence. When we keep it in their zone, I think we've been pretty good off the rush, but I think just maintaining possession in the offensive zone is another step we'd like to take on.”

The Leafs only get to see Connor McDavid and the Edmonton Oilers twice a year, but every time they do, it’s another chance for players like Matthews to measure themselves against the NHL’s most elite talent.

“With everything that he can bring to the table, he's probably the best player in the world,” Matthews said of McDavid. “It's always fun going against the other team's top players, especially [McDavid and Leon Draisaitl] who've been on fire all year. They always present a challenge any time they're on the ice, so you have to make sure you're ready to go for sure.”

McDavid and Draisaitl sit tied atop the NHL in points (65 apiece), but Toronto held them to just a single assist in a 4-1 win at Edmonton on Dec. 14. Defenceman Jake Muzzin was a major factor in that victory, acting alongside Justin Holl as the Leafs’ shutdown pairing against McDavid and Draisaitl, but he'll miss the rematch with a broken foot.

The Oilers’ have also since split up their dynamic duo on to different lines, but the Leafs' game plan for stifling Edmonton's best players remains mostly the same.

“The strategy doesn't change a whole lot,” Keefe said. “It's a little bit different in terms of the challenge with two separate lines and someone like Muzz being out, but we’ve felt pretty good about how we played defensively here. We're going to be very aware of who we're on the ice against, of course, but still just play within our structure and the things that we want to do and just try to keep the puck as much as we can away from those guys.”

Tavares identified the middle of the ice as a critical area for the Leafs to key on when McDavid and Draisaitl are out, knowing it’s where they can really start to do damage.

“[It’s about] being strong with the puck, being good in the neutral zone, not giving them the time and space to generate the speed and their playmaking ability,” Tavares said. “Also, I think we have to stay out of the box. They have a very good power play and really very talented players and they got some good shooters as well. You really want them to have to earn every opportunity they get, and we'll do the best job that we can to protect the middle.”

Since Muzzin hurt his foot against the New Jersey Devils on Dec. 27, Keefe has turned to Martin Marincin as his replacement on Toronto’s second pairing with Holl, and the results have so far been to his liking.

“We've been happy with them,” Keefe said. “Losing Muzz is tough for us, of course, but we wanted to see how Marincin could do with a little more consistency in his opportunity. So we just kind of put him in there to see how he would do and he's done really well. It's going to be a greater challenge here today, but I believe in Marty, and his abilities; he's helped us on our penalty kill, he's already been able to fill in for Muzz there. And then at five-on-five, we've seen some really good things with gap control and defending the neutral zone and that's going to be really important to this game.”

Prior to Muzzin’s injury, Marincin had been on a yo-yo all season between the Leafs and the American Hockey League’s Toronto Marlies.

When at the NHL level, Marincin has rarely been more than an extra body, while in the AHL he can be a prominent contributor on the blueline. Keefe saw that firsthand when Marincin and Holl acted as the Marlies’ top defence pairing en route to their Calder Cup victory in 2018, but so far Marincin has struggled to translate that success to the NHL.

“It’s hard to say [why],” Keefe explained. “Some players struggle with that jump, and for some it's a little more seamless and those are the ones that become full time NHLers and thrive. Marty hasn't been able to do that yet. But he's remained confident in himself. He's been a good teammate.”

Bouncing between the two leagues has been partially Marincin’s choice.

“At times we sort of left it up to him, like 'Are you good? Do you want to stick around or do you want to go down and get a game in?' and every time he's wanted to go and play," Keefe said. "For players in that circumstance, you try to have a little bit of understanding about what they may be going through and sometimes going up and down can weigh on a player, but some guys sitting for too long also weighs on them and they want to get playing.”

As soon as Muzzin got hurt, Keefe told Marincin he was going to be stepping in more permanently, and he hasn’t looked back.

“I just said, 'You're here, you're going to play. You'll get an opportunity. Just relax, go. I believe in you. I've seen you do really well, done really well with Justin Holl – that's who you're going to play with – so just go do your thing, and have some fun with it.' We like what we've seen from him in that sense so far.”

When Team Canada charged back to defeat Team Russia 4-3 and take World Junior gold on Sunday, the game was being watched by a few prominent NHLers.

“It was another classic,” said Tavares. “It was a great game and both teams played well. Great to see those guys bring it home and play the way they did. They faced a lot of adversity over the tournament and definitely in that game, so quite the finish.”

“That was really exciting,” added McDavid. “I'm definitely someone that loves the World Juniors. I watched pretty much every game when I can, so it was fun watching yesterday.”

Canada’s victory only underscored for Tavares what makes those types of tournaments so enjoyable to play in, and why he’d like to see NHL players return to the Olympics in the future.

“With a game like we got yesterday, I know it's Under-20 World Juniors, but it proves when you get the best players in the world playing for their country, it's very hard to beat,” he said. “It's created some of the best moments in hockey history, so I don't know why we don't have more of it.”

McDavid has never played for Canada in an Olympics, but would relish the chance.

“I know anytime you get a chance to represent Canada in a best-on-best tournament, it's so special and it makes for the best hockey,” McDavid said. “So I definitely hope that I get that opportunity one day.”