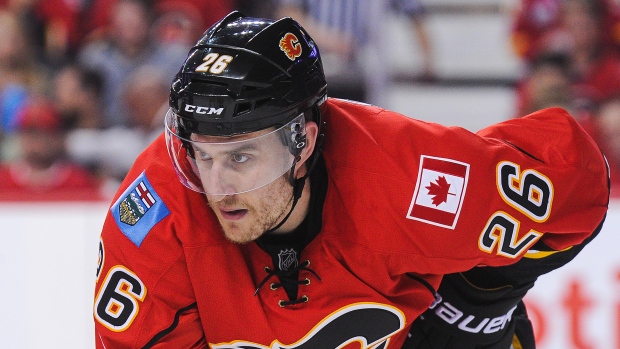 Calgary mayor Naheed Nenshi says the city remains at the negotiating table for a new NHL arena even though the Flames have declared they've pulled out of talks.

The NHL team is frustrated with "spectacularly unproductive" negotiations, according to team president Ken King.

"We remain ready to negotiate in good faith," the mayor countered Wednesday.

"We worked very hard to come up with a deal that makes sense in this economy without impacting people's taxes that nonetheless participates in both the risk and the upside."

The initial $890-million CalgaryNext project the Flames pitched two years ago included an arena, football stadium and field house built on the west side of downtown.

The Flames' owners offered $200 million of their money and proposed a $250-million loan be repaid through a ticket surcharge, with the city covering the rest.

Council disagreed with the CalgaryNext price tag saying the project would cost approximately $1.8 billion when cleanup of creosote-soaked soil was included.

CalgaryNext moved to the back burner when council showed more enthusiasm for building an arena closer to the 34-year-old Scotiabank Saddledome in a planned arts and entertainment district on the downtown east side.

Councillors voted Wednesday to allow Nenshi to release financial details on the "Victoria Park" option, which the mayor said he would do soon.

The Globe and Mail reported Wednesday the city offered to pay a third of the cost, but that money had to be paid back.

King said the Flames' contribution to the Victoria Park option was "substantial."

"You know the kind of commitment we were prepared to make to the west village, the kind of ratio that was," he said Tuesday.

"It wouldn't come as any surprise to anybody to understand it might be a similar ratio on this side."

While King denied making the arena an election issue, the timing of the team's bombshell seems designed to turn up on the heat on the mayor and councillors ahead of the Oct. 16 civic election.

"If you're trying to influence the general public, I think putting that on the table right in the midst of the election ultimately can achieve better results from their perspective," said Coun. Andre Chabot, who is one of nine candidates running for mayor.

Nenshi, who seeks a third term, has at times downplayed the economic benefit of a new arena, which created tension between the NHL team and the mayor.

The trigger for the Flames' withdrawal seemed to be Nenshi speaking to media earlier this week about how an arena fits into his vision of revitalizing an area known as the East Village.

King said after he talked with Nenshi's chief of staff Monday, the Flames owners met with NHL commissioner Gary Bettman to inform him they were pulling the plug on talks.

"The mayor's campaign seemed to kick off with a vision for Victoria Park," King said.

"I wanted to really understand if in fact his announcement of the vision and what they deem to be a fair deal was maybe the signal they were prepared to do our deal. It was made very clear to me that they were not."

The Flames players report for physical testing Thursday. King said the team is not leaving Calgary any time soon despite no firm agreement on a new building.

Former federal cabinet minister Jason Kenney, who is running for the leadership of the province's United Conservative party, urged both sides to continue talking.

"I would, like most Calgarians, encourage both sides to sit down and discuss this in good faith," Kenney said.

"None of us want to jeopardize the presence of an NHL team here because two can't sit down and have a grown-up conversation in good faith."

Note to readers: This is a corrected story. A previous version had an incorrect figure for council's projected cost of CalgaryNext project and had the incorrect date for the upcoming civic election.