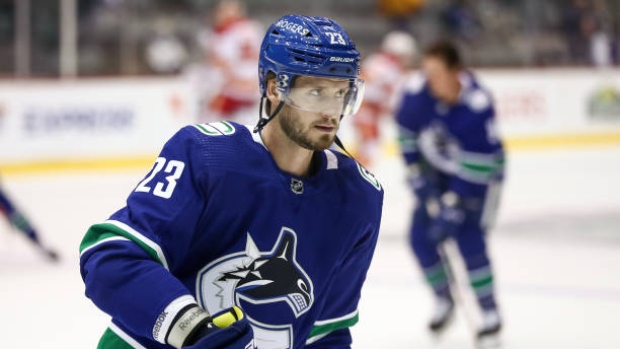 There is an interesting dichotomy between forwards, defencemen, and how NHL coaching staffs treat changes in performance.

If you are a high-scoring forward that enters a lengthy scoring slump, expect your minutes to aggressively taper. If you are a defenceman? You might be able to hold on to those minutes for a very long time.

The relationship exists, I suspect, because defensive performance is much more difficult to quantify. Simple measures like rate scoring are fantastic production proxies for forwards, but not so much for defencemen. It’s one of the reasons why you hear ice time – which has nothing to do with production, but rather a coach’s forecast of future production – referenced as a defining measure for defenders.

Ice time assumes coaches are getting deployment right. And by and large, that’s the case. The most productive defenders in the league are generally players coaches have on the first pair. Players harder to differentiate from top-tier AHL talent tend to find themselves on a third pair with significantly less usage.

But what happens when the system breaks? Front offices around the league are constantly looking for diamonds in the rough to buy low on – players who are productive in limited roles but haven’t been able to tap into extra ice time for any number of reasons.

The opposite is also true; there are a handful of players who see heavy utilization yet perform dismally in those minutes.

If you take a unit of measure (I’ll use the regression-based Goals Above Replacement measure here) and measure it against usage, you can see which players are upside down in their minutes. There are four key takeaways:

- The list is entirely comprised of defencemen.
- Most of these defencemen have hundreds of games played.
- The most upside-down defenders are playing in Canadian markets next season.
- Three of the defenders were traded in major off-season deals.

The below table shows each defender’s Goals Above Replacement percentile against his usage percentiles:

Every one of these defenders played first-pairing minutes last year, and some of them – like Los Angeles’ Drew Doughty and Edmonton’s Duncan Keith – played more than just about anyone in the league.

It’s true that most of these defenders were playing on average or subpar teams and may have been disproportionately hit by the lack of talent around them. But there is another side of that coin: that the teams were bad because the players earning the most minutes were routinely getting beat by the competition.

Let’s focus on the four Canadian defenders for a moment. Vancouver made a giant bet on Oliver Ekman-Larsson bouncing back after some shaky seasons in the desert; Edmonton followed suit with their bet on Keith. Tyler Myers and Nikita Zaitsev return for their third seasons in Vancouver and Ottawa, respectively.

There’s also an interesting split between the two – whereas Keith and Ekman-Larsson had incredible performance peaks, that was never the case for Myers and Zaitsev. We will look at expected goal rates here to control for goaltending effects across the four teams: 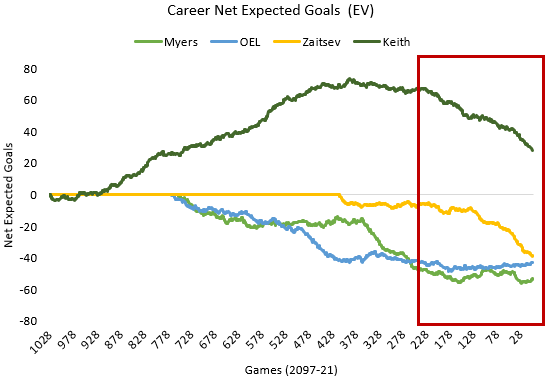 There are some indisputably ugly downtrends here. Of the four, it seems likely that Ekman-Larsson is the best bet to rebound with a new organization in Vancouver. Ekman-Larsson’s play hasn’t stepped down as aggressively as Keith’s or Myers’, and a changing landscape – where he’ll indisputably have more offensive firepower in front of him, if nothing else – may be what he needed for a bounce-back season.

That said, this isn’t a group of players you want to be betting on if you are looking for considerable upside. It’s broadly a group that has racked up a ton of mileage, meaning considerable wear and injury history, and have defined peak performance years well in the past. It’s also a group of players who have anchored broader team production down in recent years, irrespective of where they were playing and who they were playing with.​

It’s likely they will get minutes to open this season once more. This time, the proverbial leash will be much shorter.