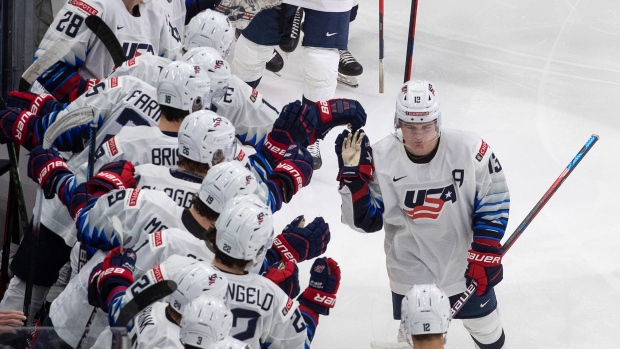 EDMONTON — Cole Caufield scored two goals in a 35-second span, and the United States held on to beat Finland 3-2 in a world junior hockey championship tune-up game on Tuesday at Rogers Place.

Arthur Kaliyev also scored for the Americans, who finished sixth in the Czech Republic last time out after a 1-0 loss to the Finns in the quarterfinals.

Juuso Parssinen and Topi Niemela had goals for Finland, which lost 3-2 in the bronze-medal game against Sweden in 2020.

Knight and Wolf are two of eight returning players for the U.S.

Kari Piiroinen kicked out 26-of-29 shots in two period of work for Finland. Roope Taponen came in for the third and stopped all 16 shots his way.

Canada, last year's gold-medal winner, will face the silver medallists from Russia on Wednesday in its only pre-tournament game.

The 2021 tournament officially opens on Friday with three preliminary-round games — the U.S. against Russia, Finland against Germany and Slovakia versus Switzerland. The Canadians open round-robin play against the Germans on Saturday.

Parssinen opened the scoring for the Finns just 1:26 into the game while Kaliyev sat in the box for checking from behind.

Finland took the next four minor penalties, and Kaliyev snapped home a goal while on an American power play to even the scoreboard at 19:54 of the period.

Niemela got one back for Finland, its second power-play goal of the night at 8:23.

This report by The Canadian Press was first published Dec. 22, 2020.