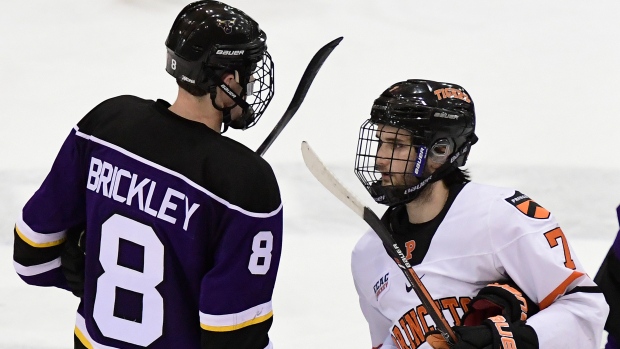 Top college UFA D Daniel Brickley of Minnesota State has narrowed his list of NHL possibilities to five and is likely to make a final decision on where to sign in the next day or two or three.

He is expected to make his decision in the next few days.

Brickley is eligible to sign a two-year, entry-level contract, although if he plays an NHL regular season game this season, which McKenzie notes is more likely than not, he will burn the first year of his contract.

He is not eligible to play in the Stanley Cup Playoffs this season. In 40 games at Minnesota State, Brickley has 10 goals and 25 assists.

As @MarkLazerus has reported, likely only a matter of days until Northeastern’s Dylan Sikura is signed and in CHI lineup. Two sides expected to get the ball rolling on formalities (contract/immigration) in the next day or so: https://t.co/j7TxfEF053

He had 21 goals and 32 assists in 34 games this season for Northeastern.

Meanwhile, McKenzie reports that Northeastern's Adam Gaudette is expected to receive a strong pitch from the Vancouver Canucks to turn pro following his 30-goal, 60-point season. He is expected to meet with family/advisors in the coming days to consider options.

Having completed his junior season and scoring 30 goals and 60 points this year to be a top contender for the Hobey Baker, the sense seems to be Gaudette is ready to turn pro with VAN but that decision isn’t likely to be made for at least 24 to 48 hours.