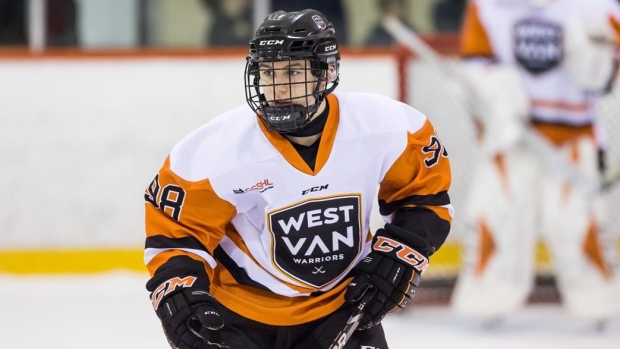 Back in March, Hockey Canada granted Connor Bedard exceptional player status allowing him to suit up​ in the Western Hockey League as a 15-year-old. Bedard, a right-shooting centre, is the seventh player to ever receive this distinction in the Canadian Hockey League and the first in the WHL.

A few days after the announcement, Bedard's phone rang and caller ID showed a number he didn't recognize.

"It's from California,"​ he recalled. "I think it's one of those robot things that's calling so I didn't answer it. Then it called again and I answered and he's like, 'Hey, I'm Wayne Gretzky,' and I was sure it was a prank call at first."

In the past, Bedard's friends had called him pretending to be scouts, but this was no joke. This was The Great One.

"I couldn't say anything at first," Bedard admitted with a smile. "I was just so starstruck. The first 10 seconds I don'​t think I said a word and I just kind of mumbled. He said, 'Congrats,' and 'good luck,' and that if I need any advice or anything I could always reach out to him. That was so special and shows what kind of person he is. It was crazy that he would take the time to do that. That was probably the coolest thing that happened."

As he prepares for the next chapter of his career, Bedard is now armed with Gretzky's number in his contact list.

"If I don't end up making the NHL I can always say that," he said with a chuckle.

Bedard appears to be on track to do a lot more than simply make the NHL. He's among the early favourites to be the No. 1 pick in the 2023 draft. Bedard was already the top pick in April's WHL draft going to the Regina Pats after producing 84 points in 36 games with West Van Academy Prep and being named the Canadian Sport School Hockey League​'s U18 MVP.

Congrats to @WestVanWarriors student athlete Connor Bedard on leading the Midget Prep Division in scoring during the 2019-20 season with 84 points (43-41-84) in 36 games! pic.twitter.com/2louMXz052

The hoopla around Bedard has quieted a bit​ in recent months as the hockey community and the wider world comes to grips with how to operate in a pandemic. It's an unusual time to be an exceptional talent and Bedard, with the help of agent Greg Landry from Newport Sports Management, has found a creative way to stay sharp. Since the second week of September he has been in ​Jonkoping, Sweden training at the HV71 facility with the SHL club's junior players.

Connor Bedard is working hard in Sweden, getting ready for January 8!!

With WHL training camps not slated to open until after Christmas, Bedard is planning to stay in Sweden for at least another few weeks. Bedard spoke to TSN via Zoom on Sunday​ and reflected on his experience overseas. The North Vancouver native also shared his favourite moment growing up as a Canucks fan and explained what he's learned from skating with fellow B.C. boy Mathew Barzal. The following is an edited transcript of the conversation.

What has the experience in Sweden been like? Has it met your expectations?

"It's been really good ... getting to have one practice focused on skills in the morning and one focused on game-type stuff later is really nice."

I'm sure you're looking to improve every part of your game, but is there one specific area you're focused on?

"I can definitely improve on everything, but I think quickness, my first three steps and the power with my skating. Skating is a huge thing to work on. Obviously, it's going to be a lot faster this year playing with older guys so I think that's probably my biggest focus."

How would you describe your game?

"A 200-foot centre. I'm at my best when I have the puck on my stick. My strongest point is probably my shot, but I think I can move the puck well, too. I think that's an underrated part of my game."

What was the key to getting your shot so good at such a young age?

"A lot of practice and shooting lots of pucks in my backyard. I had a broken wrist on my right hand for like two months and so I was working on my top hand a lot and I built up a lot of strength there and I think that helped a bit."

A face of the #CHL’s future:

Get to know Connor Bedard the highly skilled centre who will officially be selected first overall by @WHLPats in the 2020 #WHLBantamDraft and given his Exceptional Player status will compete in @TheWHL next season at age 15. pic.twitter.com/vtVSjr8zmR

Do you have a favourite player or players to watch right now?

"My favourite player has always been [Sidney] Crosby growing up and now new guys [Auston] Matthews and [Mathew] Barzal. Matthews with his shot, you know, the way he can shoot the puck is so crazy. And I got to skate with Barzal this summer so I think I'm a bit biased there."

What's it like when you're on the ice with Barzal?

"It's pretty cool. I get to see how good he is, how ni​ce of a skater he is and that stuff. And being able to talk to him, he’s such a nice guy and he gives me lots of good tips."​

What stands out about the way he skates?

"Just how low he is and how controlled and powerful. The way he crosses over and gets speed out of a turn, like, I’ve never seen anything like it."

Growing up in Vancouver, did you have a favourite fan moment?

"In 2011 I was at the game against San Jose, Game 5, that they won to go to the final. I was there and a huge fan of the Canucks and [Ryan] Kesler got the 2-2 goal with like 14 seconds [left] and the guy behind me jumped up and spilled all his beer on me and I was like five or something. I went home and my mom was confused about why​ I smelled like booze."

Why did you want exceptional status?

"It was a huge decision to apply and I think it's just for a challenge. I know it's going to be tough, it's such a good league, [but] I was able to do well at the U18 [level] last year so I think playing that again wouldn't be as beneficial as getting to go up against 18, 19, 20-year-olds."

"I was six-years-old and we were going to Spring hockey and I saw that nobody in the NHL wore it so I thought that was kind of cool."

There is already talk about you being a top pick in the NHL draft. How big of a goal is that for you?

"I can't say I don't want that. Obviously, that'd be pretty special. It's a long way aways, but, yeah, for sure, I'd be excited if that were to happen. I think that’s something I'm working towards ... if I am able to go in the higher portion of it that'd be super cool."

So, you get exceptional status and Wayne Gretzky is calling you; how do you handle the hype and pressure?

"If someone expects something from me I'm going to expect more from myself. My toughest critic, I guarantee I'm two times harder on myself ... if I'm online and someone's saying I had a bad game or something then, you know, I'm definitely saying that to myself, too, so I've always been that way. I put pressure on myself and I think that's something that's helped me."