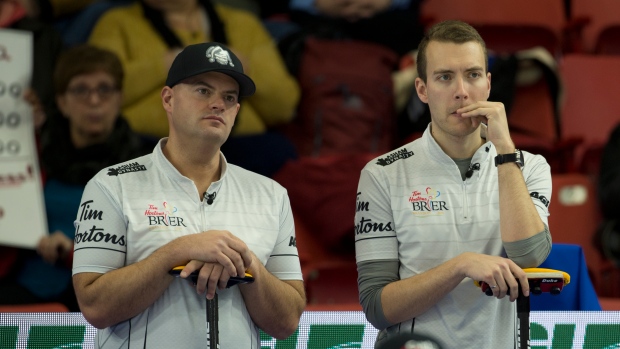 Breaking up is hard to do. In curling, it’s especially so.

One of the game’s most successful teams made a dramatic alteration to its lineup on Friday with Team Bottcher, the reigning Canadian men’s champions, parting ways with third Darren Moulding.

News of the move was posted on social media and set off a flurry of harsh responses, not so much for what had happened but more the why and how.

Moulding was given the verdict in a team meeting on Friday. Team Bottcher, which finished a disappointing seventh at last month’s Tim Hortons Canadian Curling Trials, is set to defend its Tim Hortons Brier title in March and now must locate a replacement third. Bottcher said there was no good time to make a change and that the decision was based on the rink’s morale.

“It was a team decision,” he stated at a hastily arranged virtual press conference on Sunday. “Obviously as the leader of the team I was the one to make the final decision and implement that decision. It just felt like we lost that chemistry and the fit was no longer there. We felt like really for the best of everyone moving forward, now was the best time to make that hard decision.

“One day you wake up and look in the mirror and you just don’t have that chemistry any more and it’s hard to put your finger on what it is and how you lost it.”

The biggest issue with the parting came when the three remaining members of the team posted a press release on social media that said Moulding was stepping away from curling for personal reasons.

The term “personal reasons” seemed to indicate there was some sort of health-related issue with Moulding who was surprised by the release.

“I was driving with my son and all of a sudden my phone has hundreds of people calling and texting, worried about me and wondering what was going on,” said Moulding.

Bottcher said in hindsight, he regretted using those words to describe the breakup.

“It was originally believed that using the term ‘personal reasons’ in our press release gave everyone concerned a good reason why we were parting ways,” he said. “I didn’t mean any subtext in that; there was no malice or bad intent. It was just to keep all the doors open for all of us moving forward.”

Even the words ‘stepping away’ were inaccurate, said Moulding. He indicated that he was ready to play if the right offer came his way and said there have been inquiries for his services.

He did agree that the team was not a happy squad and it had been that way for some time.

“I hated curling this fall,” he admitted. “A lot of what (Brendan) said was right. The chemistry was absolutely gone. I really didn’t enjoy going to the rink.”

Moulding said he went to Bottcher early in the year and offered up some thoughts on what the team members needed to do to make things better, including being completely open but it didn’t go very far.

One of the issues, he said, surrounded the team’s finances. Moulding said that second Brad Thiessen told him that Bottcher was taking more than his fair share of the team’s funds. However when Moulding brought the issue up at a team meeting, Thiessen stayed mum and didn’t offer any backup to the comments he allegedly made earlier.

Bottcher denied any notion that he was taking more than his fair share.

“Yes, unequivoquilly yes,” he said when asked if the team shared money equally. “All the members of my team always have and always will get an equal share of everything. I’ve tried to have as much transparency as I can.”

Bottcher said that the team does not yet have a replacement but will begin the search for a curler who will join them for the second half of the season, including the Brier. He added that he hoped time might ease the strained relationship between the skip and ex-third.

“Darren had five amazing seasons with us,” he said. “We played over 300 games together. We played almost two dozen Grand Slams, five Briers and a world championship, just to start to name some of the success we had. I really want to reflect on that in a positive way. Darren was a critical block on our team. We don’t win a lot of that stuff without him.

“I’m going to see Darren around. I hope I see him out on the ice. I really do. I hope a period of time will pass and we can have a coffee or a beer or even go golfing. The four of us, what we’ve accomplished in half a decade, I have so many good memories there and I think there’s so much to cherish into the future and I hope we can all sit down as a team one day and have a drink and really reminisce about all the good moments that we have and put aside the tough 48 hours we’ve had here.”

Judging by his comments, it might take Moulding, who was still reeling from the termination of his duties, some time to feel at ease.