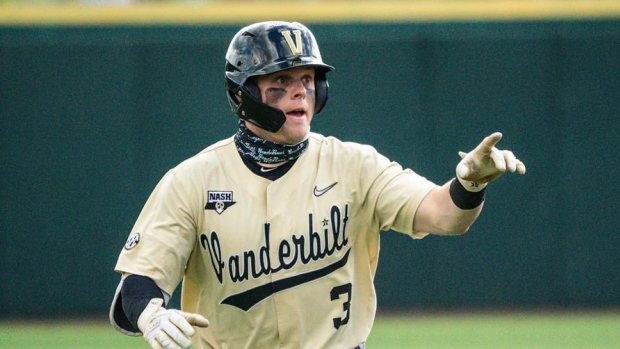 Canadian outfielder Cooper Davis is back at the College World Series.

The 22-year-old from Mississauga, Ont., and Vanderbilt (45-15) open Saturday against Arizona (45-16). The eight-team tournament in Omaha, Neb., is split into two double-elimination brackets with the bracket winners meeting in the College World Series Finals, a best-of-three series to decide the NCAA champion.

The Commodores have been on a roll in recent years with five trips to the College World Series. Vanderbilt made its Omaha debut in 2011, was runner-up in 2015 and won national titles in 2014 and 2019.

Davis, a left-fielder, was part of the 2019 team but, as a younger player, did not see action.

"It definitely feels like something more special after we had last season taken away, we've been locked up for a long time. So if definitely feels really special to get this opportunity to go back there," he said.

Mississippi State's Eric Cerantola, a pitcher from Oakville, Ont., and Virginia's Marc Lebreux, an outfielder from Montreal, will also be flying the Canadian colours in Omaha. Davis, a former member of the Canadian Premier Baseball League's Ontario Blue Jays, played with Cerantola on the Canadian junior national team.

Davis was selected out of St. Aloysius Gonzaga Secondary School by the Blue Jays in the 25th round of the 2017 draft. He chose Vanderbilt instead.

"It was a really cool opportunity to be drafted by the Toronto Blue Jays, obviously (my) hometown team," said Davis, now a senior. "For them to recognize me in that situation was amazing. I was so happy.

"But I knew the right move was definitely to go to college and get an education and play college baseball. Because there's so many different experiences that I wouldn't have gotten — like going to two College World Series, getting a degree and doing all these different things that are really important that I might have missed out on had I joined professional baseball."

Being in Nashville is also a plus.

"Nashville's awesome. Nashville's a great city," he said. "It's a lot of fun. The people here are amazing. The other thing that's pretty awesome is the fan base we have here."

A speedy outfielder, Davis is a versatile hitter who can get on base. "That's definitely my game … to get to first base," he said.

His team has a deep tool box, he added. "We're a very diverse team, we can (do) pretty much everything."

Davis' hell-for-leather playing style comes at a cost. He calls them "freak accidents" but acknowledges they come "from playing the game hard."

His senior season got off to a painful start when he was hurt in his first at-bat. Playing against Wright State, he fouled off a pitch, with the ball coming off the bat, hitting his face and breaking his nose. When he returned, he wore a batting helmet with a cage.

As a freshman, he broke his wrist.

"Those definitely weren't the best experiences but, you know, I'm thankful that they happened," he said. "Because you learn from them, you move forward. It gives you the opportunity to overcome something challenging."

This report by The Canadian Press was first published June 17, 2021