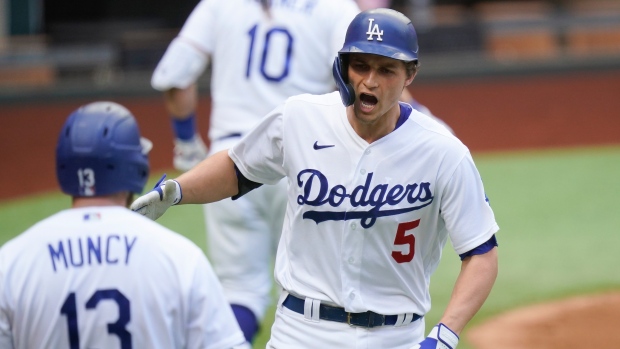 It looks like Marcus Semien was just the beginning.

Infielder Corey Seager is in agreement on a 10-year, $325 million deal with the Texas Rangers, according to ESPN's Jeff Passan.

BREAKING: Star shortstop Corey Seager and the Texas Rangers are in agreement on a 10-year, $325 million deal, sources familiar with the situation tell ESPN.

Seager missed a large chunk of the season after fracturing his right hand on a hit-by-pitch from Ross Detwiler of the Miami Marlins on May 15. The injury kept Seager out of the lineup until July 30, the same day L.A. acquired shortstop Trea Turner and right-hander Max Scherzer in a trade with the Washington Nationals.

The season before, Seager hit .307 with 15 home runs and 41 RBI in 52 games, finishing ninth in National League MVP voting and helping the Dodgers win their first World Series title since 1988.

For his career, Seager has two All-Star nominations, a Rookie of the Year (2016), two Silver Sluggers, a World Series title and a World Series MVP (2020).

The Charlotte native was selected No. 18 overall by the Dodgers in the 2012 MLB Draft.

The move comes just one day after the Rangers and infielder Marcus Semien reached an agreement on a seven-year, $175 million deal.