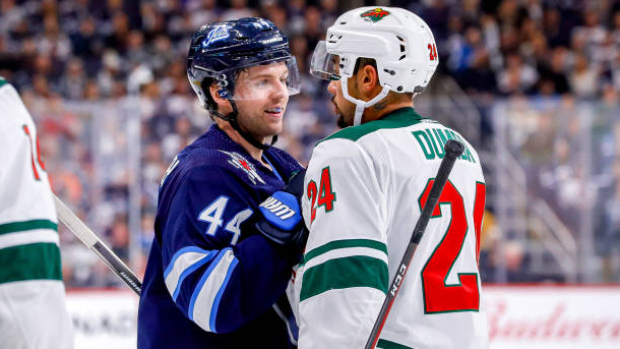 Matt Dumba continues to be involved in trade speculation after the Minnesota Wild extended Jonas Brodin, and TSN Hockey Insider Pierre LeBrun writes in The Athletic that the Winnipeg Jets have interest in the blueliner.

LeBrun notes that the Jets have a need for a top-four right-handed defenceman, but do not have the top-six centre the Wild are looking for as a return. Instead, he wonders whether the Jets could offer winger Nikolaj Ehlers in exchange for Dumba, pointing out that the two have identical $6 million cap hits.

Ehlers, who was listed at No. 12 on the first TSN Trade Bait board of the off-season earlier this month, had 25 goals and 58 points in 71 games this season. The 24-year-old added two goals in four games during the Return to Play.

TSN Hockey Insider Frank Seravalli listed 10 players on Thursday who could be in play this off-season given the financial or salary cap implications their teams are facing.

Among those to make the list were former Toronto Maple Leafs linemates Phil Kessel and Tyler Bozak. As Seravalli writes, the Arizona Coyotes are looking to cut salary to drop to an internal budget and Kessel did not appear to be a fit in his first season with the club. He carries a $6.8 million through the next two seasons, but is owed just under $6 million in real money. Meanwhile, Bozak has one-year left on his deal with the St. Louis Blues at a $5 million cap hit, but could be a necessary subtraction for the team to afford Alex Pietrangelo.

Trade rumours have followed Brock Boeser for several months, but the 23-year-old winger said Thursday he does not expect to be moved by the Vancouver Canucks this off-season.

"I don't think I'm going to get traded, but obviously, rumors are going to happen and stuff is going to be out in the media," Boeser said on a Zoom call. "I love Vancouver, I love the guys I play with, I love the organization, the fans, so I want to be a Canuck and I think our team is right there and we can win a Stanley Cup in the next couple years.

"I truly believe that, and I think our coaching staff and our teammates believe that as well. I want to stay in Vancouver."

Boeser, who had 16 goals and 45 points in 57 games this season, faced speculation on his future with the Canucks prior to the Return to Play, with general manager Jim Benning responding that he had "no intention of trading Brock Boeser."