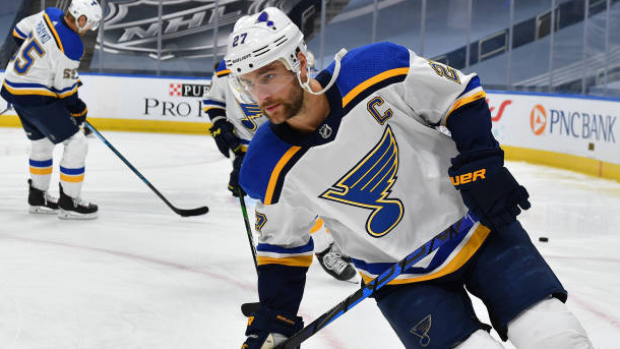 St, Louis Blues captain Alex Pietrangelo may be set to hit the open market in October, revealing to The Athletic that there's been little progress in his negotiations to date.

The 30-year-old defenceman, who led the Blues in average ice time at 24:11 per game, was ranked No. 1 among TSN’s top pending players last month.

“It’s been a little disappointing that we haven’t been able to get a deal done, obviously,” Pietrangelo told TSN Hockey Insider Pierre LeBrun for The Athletic. “But this is the situation that we’re in, we’re over three weeks away from Oct. 9. There hasn’t been a whole lot of discussion where things are at. We’ll see if things pick up here shortly. There hasn’t been much in terms of progress. But at the same time, I guess anything can happen, over the next couple of weeks when it comes down to crunch time when a free agent starts to look forward knowing Oct. 9 is just a couple of weeks away.”

Pietrangelo had 16 goals and 52 points in 70 games during the regular season, adding one goal and six points in games upon the NHL's Return to Play.

The King City, Ont., native has spent his entire career to date with the Blues, who drafted him fourth overall in 2008. He admitted to LeBrun that he has thought ahead to where he would like to play should no deal be worked out from the Blues, but left the door open for a last-minute deal like Steven Stamkos signed in 2016.

“My wife and I have thought hard about this throughout the year and especially now that we’re at this point,” Pietrangelo said. “We have an idea of what we want to do if things get to that point. We’re on the same page, which is good. We see things the same way. We’ll see where it goes the next couple of weeks. Like I said, there’s not been a lot of progress, but at the same time, and Stammer is a prime example, you never know what the last thing is going to happen.”

However, looking ahead to next year, five key members of the team's roster - Tomas Tatar, Brendan Gallagher, Phillip Danault, Joel Armia and Jeff Petry - are all set to see their current contracts expire and Gallagher admitted the clock is ticking for the core to prove they can win together.

“There’s definitely a lot of uncertainty,” Gallagher told reporters on Monday. “We talk to you guys all the time about how much we love playing together, so if we want it to stay that way, I think you have to start demanding results. Obviously, we can be happy with our playoffs, but the regular season wasn’t good enough. We’ve got to demand better. So there is a little bit of a sense of urgency for sure. I mean, there always is, and with each year when you don’t reach the ultimate goal it grows and grows. As competitors, that’s what you want.

"But for us going into next year, the expectations need to be a little bit higher than the results we’ve gotten in the past. It will be an opportunity for us as a group to prove we can go out and get the job done.”

The Canadiens, who were the 12th seed in the NHL's Return to Play, defeated the Pittsburgh Penguins in four games to reach the postseason, falling to the Philadelphia Flyers in the first round.

“Change happens,” he added. “How much change, I guess, is up to us a little bit, how much we control and the results that we get. If we don’t get the results needed, there will be more change than you want.”

Gallagher, who had 22 goals and 43 points in 59 games this season, also weighed in on the future on Max Domi, who's restricted free agent this fall after spending much of the Return to Play on the team's fourth line.

"Such an important piece of our team when he’s on his game," Gallagher said of Domi. "Can’t comment on the contract stuff. But he’s a guy since he’s come here, helps us win games, makes an impact."

Domi, who had 17 goals and 44 points in 71 games during the regular season, had three assists in 10 games in the Toronto bubble.

After being acquired from the Canadiens ahead of the trade deadline, Nate Thompson made it clear Monday he'd be open to returning to the Philadelphia Flyers next season.

Thompson is slated to become an unrestricted free agent after posting four goals and 15 points in 70 games with the two teams. He had one goal in 16 points with the Flyers upon the league's Return to Play.

“I’d be very interested," Thompson said of the possibility of re-signing. "I love the group of guys, the coaching staff. I thought it was a good fit for me. I think this team has a window of winning so if it’s a possibility, I would like to be a part of it."

Nate Thompson on the possibility of re-signing in Philly: “I’d be very interested. I love the group of guys, the coaching staff. I thought it was a good fit for me. I think this team has a window of winning so if it’s a possibility, I would like to be a part of it." pic.twitter.com/EE8jJ6SEgU