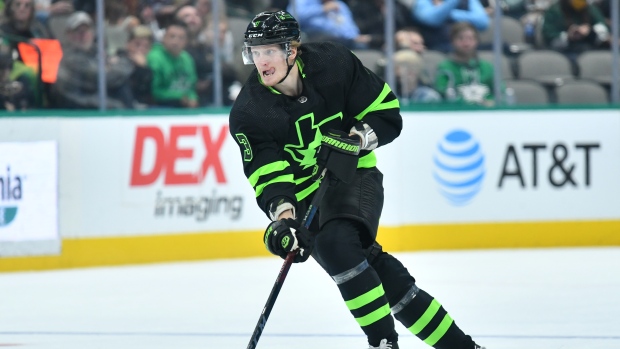 After a slow start, the Dallas Stars have moved back within striking distance of a playoff spot and may elect to stand pat, or even add at the deadline.

Front and centre of the Stars deadline plans is defenceman John Klingberg, who TSN Hockey Insider Pierre LeBrun reports has requested a trade. Klingberg, a pending unrestricted free agent, is listed at No. 5 on TSN Hockey's Trade Bait List, but Stars general manager Jim Nill is in no rush to deal the 29-year-old.

“We’ve had open dialogue with John and his representatives,” Nill told LeBrun in The Athletic. “In the end, the best thing is, and we’ve talked about this, is just ‘John, go play some good hockey and good things are going to happen. We’ll figure things out.’ I fully understand their position. They know our position. But the bottom line is if John plays well and the team has success, things will look after themselves. That’s kind of where we’re at.’’

Klingberg has one goal and 26 points in 42 games this season after posting a goal and 36 points in 53 games last season. He carries a cap hit of $4.25 million for the remainder of this year.

LeBrun notes that if the Stars, who currently sit three points back of the Los Angeles Kings for the final wild-card spot with a game in hand, continue rising, the team may elect to keep Klingberg as an 'own rental.'

Nill, meanwhile, intends to continue to weigh the team's success over the coming weeks before making any final decisions.

“It’s going to be the performance of our team which dictates which way we go,” Nill said. “I’ve talked to everybody (other teams). We’ve had our pro meetings. We’re in a position where we can add if we look pretty good, or we can stay status quo, or if it looks like we’re dropping out of it, we can make some decisions from there.’’

In addition to Klingberg, the Stars also have veteran forwards Joe Pavelski, Alexander Radulov and Michael Raffl, along with goalie Braden Holtby playing on expiring deals.

The Toronto Maple Leafs boosted their goaltending depth on Sunday, acquiring Carter Hutton from the Arizona Coyotes for future considerations.

Hutton, however, will not be making his Maple Leafs - or even Marlies - debut anytime soon, however, as Craig Morgan of PHNX Sports reports the goaltender will remain in Tucson until the Leafs decide to have him come north.

As Craig reports, plan is for Hutton to stay in Tucson for now although at some point I think the Leafs may decide to reassign him to the Marlies. Either way, the Leafs added experienced goalie depth at no cost. https://t.co/8bAbLPTZ5t

Hutton has a 7.76 goals-against average and a .741 save percentage over three games in Arizona this season.

There's been no shortage of speculation regarding reigning Vezina Trophy winner Marc-Andre Fleury, who sits at No. 3 on the Trade Bait List.

While it remains unclear if the Chicago Blackhawks will deal the pending unrestricted free agent, TSN Hockey Analyst Jamie McLennan believes the Edmonton Oilers, Boston Bruins and the Vegas Golden Knights could be good landing spots for Fleury on the trade market.

Where would Marc-Andre Fleury be a good fit heading into the deadline? Is picking up Carter Hutton a good depth move for the Maple Leafs? Jamie McLennan joins Jay to discuss this and more in the latest Tasteful Noods.