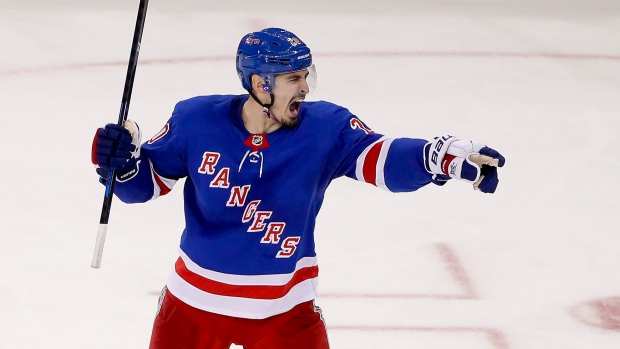 What can the Rangers ask for?

Chris Kreider has put up 20 goals in four of his past five seasons and is well on his way to reaching the mark again in 2019-20. Through 50 games, the 28-year-old has 18 goals and 17 assists for 35 points on a New York Rangers team almost certainly labelled as sellers leading up to the Feb. 24 trade deadline.

So what would it cost to acquire him? According to The Athletic’s Jeremy Rutherford, the price for him might be a little higher this year given the scarcity of top-six forwards on the market.

“[Kreider] could really help the Blues, but any other year, he’s probably not going to fetch a first-round pick and a prospect. This year, however, Kreider might attract one because he’s going to be one of the top available guys on the market,” Rutherford wrote earlier this week.

However, how much Kreider can bring back in a potential trade may depend on his health. He left Saturday's game against the Red Wings in Detroit after taking an inadvertent knee to the head from teammate Mika Zibanejad, but head coach David Quinn said he expects Kreider to be fine, calling him "day-to-day."

It was a very nervous hour or so in Rangersland, but it seems that Chris Kreider is relatively OK after taking a knee to the head. No concussion, Quinn said, and “day to day.” More #NYR notes on D pairs, lines, and goalies. https://t.co/bVrpPzfogl

On Thursday’s edition of Insider Trading, TSN Hockey Insider Pierre LeBrun reported that eight teams have expressed interest in the veteran forward, who currently sits at No. 1 on TSN’s Trade Bait Board.

LeBrun reported the asking price is expected to be similar to what the Rangers got last season for Kevin Hayes when he went to the Winnipeg Jets as a rental in exchange for a first-round pick, Brendan Lemieux and a conditional fourth-rounder. Hayes went on to play a total of 26 games with the Jets, scoring seven goals and adding eight assists.

LeBrun added that the Rangers “have not lost hope” on trying to bring the pending unrestricted free agent back, but no contract talks have taken place as of Thursday. He carries a cap hit of $4.625 million this season.