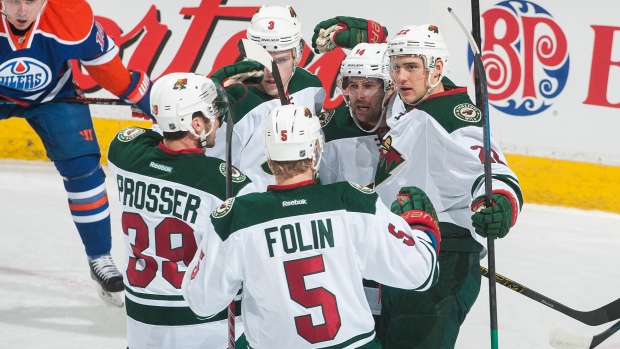 EDMONTON - A trip to Edmonton usually seems to be able to break the Minnesota Wild out of a funk.

Charlie Coyle's goal late in the third period stood up as the winner as the Wild snapped a two-game losing skid with a 2-1 victory over the Edmonton Oilers on Tuesday, their ninth win in their last 10 visits to Edmonton.

Nino Niederreiter also scored for the Wild (21-20-6), who have only three wins to show from their last 11 games.

"It's good to get the two points and definitely some opportunities to learn a few lessons in that game. But overall, we did a lot of good things too," said Wild head coach Mike Yeo. "Charlie's goal couldn't have come at a better time. We had started to lose momentum because of the turnovers that we had and so when you get an opportunity like that and you get to capitalize on it, that's obviously huge."

Wild assistant captain Zach Parise was relieved his team was able to hang on, as they didn't seem to have much jump on their return from the NHL all-star break.

"It was a pretty boring game, there is not much going either way, just a lot of chipping pucks, throwing it off the glass, not much in the way of sustained pressure either way," he said. "Fortunately we were able to win, but there was not much going on.

"That first game coming back is always a tough one."

Boyd Gordon responded for the Oilers (12-27-9), who saw a rare two-game winning streak come to an end. Edmonton dropped to 3-20-8 this season against fellow Western Conference opponents.

"It was one of those games that we could have seen ourselves winning, but we had too many turnovers," Gordon said. "We didn't get a lot of pucks at the net either, especially for the first couple of periods. It wasn't good enough to win tonight.

"It was one of those games that we kind of let slip away."

Oilers interim head coach Todd Nelson agreed that his team was its own worst enemy at times.

There were too many turnovers tonight," Nelson said. "Two of them were costly. We could have managed the puck a lot better. I thought we fought the puck a bit tonight, especially early on. We had a number of chances in the third period, but we just didn't capitalize."

Minnesota scored nine minutes into the first period as Edmonton's Nail Yakupov completely lost control of a puck in front of his own net on a horrendous giveaway to Justin Fontaine, who quickly dished it to Niederreiter for a gift goal on Oilers starter Viktor Fasth. It was Niederreiter's first goal in 17 games and 15th of the season.

Parise took an errant puck in the mouth with just over seven minutes remaining in the opening period and left the game to get some work done. He returned to start the second.

Minnesota had 10 shots in the first 20 minutes, while Edmonton responded with five on Wild goalie Devan Dubnyk.

Edmonton's best chance in the first half of the game came midway through the second when Justin Schultz had a partial breakaway and got Dubnyk to go down on the play before the Wild goalie made an impressive glove save to deflect the puck over the net.

The Oilers tied the game 1-1 with 2:44 left in the second period as Gordon's backhand wraparound from behind the net hit the skate of Minnesota's Kyle Brodziak in front and deflected into the net.

Edmonton came close to taking the lead early in the third as Dubnyk gave the puck away to Jordan Eberle, but Wild defender Ryan Suter kept it out and Minnesota eventually cleared it after a brief scramble in front of the net.

The Oilers missed another opportunity just past the midmark as Yakupov made a perfect pass on a two-on-one, but Teddy Purcell shot the puck wide of the Wild net.

Minnesota went up 2-1 with 4:23 left in the third as Eberle coughed up the puck on a drop pass that deflected off Matt Fraser's skate, sending Coyle in on a breakaway. Coyle waited for Fasth to commit, then tucked the puck behind him on his way behind the net.

"It was a turnover by them and I happened to be there," Coyle said. "I saw a clear lane and I just tried taking it to the net, luckily I finished it off and it rolled in, so it was nice."

It was Coyle's fifth goal of the season.

"They got a turnover outside of our blue-line and he made a pretty move, you have got to give it to him," Fasth said. "I got caught a bit far out I think, but the guy made a great move."

Edmonton had a power play for the final 1:22 of the game and pulled Fasth for the sixth attacker, but were unable to get the equalizer.

Both teams return to the ice on Thursday as the Wild travel to Calgary to face the Flames and the Oilers remain home to take on the Buffalo Sabres in a match-up between the two teams at the bottom of the NHL standings.

Notes: It was the first of three meetings between the two teams this season. Minnesota was 2-0-1 against the Oilers last season… Oilers forward Taylor Hall sat out the game after taking a shot to the leg in practice on Monday… Minnesota's Dubnyk made his first start against his former Oilers team since a trade brought him to the Wild from the Arizona Coyotes on Jan. 14 for a third-round pick in the 2015 NHL draft. Dubnyk made three appearances against Edmonton with the Coyotes earlier this season, going 3-0-0 with a 0.97 goals-against average… Minnesota centre Mikael Granlund was back in the lineup after missing 13 games following wrist surgery from an injury sustained in a game on Dec. 27… Wild goaltender Darcy Kuemper was assigned to Iowa of the American Hockey League for a conditioning stint on Monday. Minnesota also recalled defenceman Stu Bickel from Iowa. However, he did not dress for the game… Out injured for the Wild was Keith Ballard (concussion), while Tyler Pitlick (lacerated spleen) was absent from the Oilers lineup.