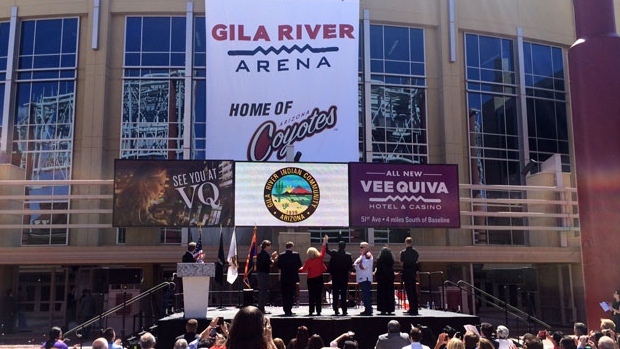 GLENDALE, Ariz. - The city of Glendale has called for a special meeting on Wednesday to determine whether to end an arena lease agreement with the Arizona Coyotes, further clouding the team's future in the desert.

The meeting agenda calls for the City Council to consider whether to cancel the professional services and arena lease agreement between Glendale and IceArizona, which co-owns the Coyotes with Andrew Barroway.

The agenda referenced an Arizona statute that allows an agency to cancel a contract if an employee significantly involved with the agreement becomes an employee or agent of the other party to the contract. Former Glendale city attorney Craig Tindall has been the Coyotes' general counsel since 2013 after stepping down from his position with the city.

The meeting agenda was posted just hours after Coyotes officials denied being in breach of the contract during a state-of-the-team media session.

"This action by the City of Glendale is completely ludicrous, especially in light of the fact that myself and Andrew Barroway visited with the City yesterday and the particulars of this were never raised," Coyotes co-owner Anthony LeBlanc said in a statement. "In fact, we to this moment have not been advised of this other than the notification on the City website. The City of Glendale is displaying a complete lack of good faith, business acumen or an understanding of a business partnership. We want to reassure our great fans that the Arizona Coyotes are committed to Glendale and playing at Gila River Arena."

The NHL issued a statement Wednesday morning in support of the Coyotes.

The Coyotes have been through similar situations numerous times since former owner Jerry Moyes took the team into bankruptcy in 2009.

The team spent four years being run by the NHL, with potential new owners appearing then falling away, along with plenty of speculation the team would be relocated.

IceArizona, headed by LeBlanc and George Gosbee, seemed to give the Coyotes stability when it bought the team in 2013, but a decision to sell a 51 per cent stake last year to Barroway, a Philadelphia hedge fund manager, led to more relocation speculation.

IceArizona said at the time that the inclusion of Barroway would only enhance the team's finances and foothold in Arizona, a statement that so far seems to have held true.

The latest development surfaced when members of the Glendale City Council reportedly were concerned that IceArizona had breached its 15-year, $225 million arena lease with the city by using the $15 million a year it receives from Glendale to pay down debt incurred when the group purchased the team.

LeBlanc and Barroway met with Glendale officials on Monday to discuss any issues with the lease agreement and finding ways to generate more non-hockey revenue at the arena.

City officials have been concerned about the cost of running the arena — $15 million per year for 15 years — but LeBlanc said the team's impact goes well beyond ticket sales.

The Coyotes also estimate an additional $2.5 million in revenue to the city through an increased sales tax at the neighbouring Westgate Entertainment District and the additional people the team brings to the area. LeBlanc added that doesn't include the $2 million the team spent to upgrade food and beverage offerings along with clubs inside Gila River Arena last year nor the $2 million in planned technology upgrades this year, including public Wi-Fi.

"Their net operating expense to operate the arena is less than $6 million," LeBlanc said. "When they were looking at options when we did our deal two years ago, the number they had in their mind if there was no hockey team, the number they had to budget was $6.5 million. We're below that, we're already below that."