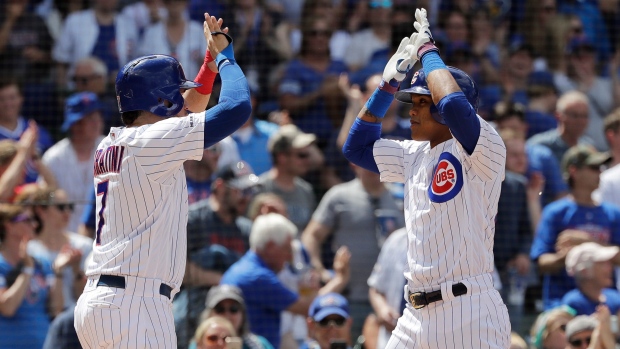 The Chicago Cubs needed every last bit of it, too.

Russell homered at Wrigley Field for the first time since he was suspended for violating baseball's domestic violence policy, leading Chicago to an 8-6 victory over the Cincinnati Reds.

With the wind blowing out on a warm afternoon at the iconic neighbourhood ballpark, Albert Almora Jr. and Jason Heyward also connected to help the NL Central-leading Cubs rebound from a disappointing loss in the series opener Friday.

Russell finished with three hits and scored twice. The second baseman also made a nice stab and tag to retire José Iglesias when he attempted to steal second in the eighth.

"I'm getting there," Russell said. "It's still a process right now. I think whenever the right time is here, I'm gonna be able to bloom."

Russell was optioned to Triple-A Iowa after completing his suspension this month, but he was recalled May 8 and hit his first homer of the season May 15 at Cincinnati.

He hit a two-run homer in the fourth inning Saturday, giving the Cubs a 3-2 lead. He also had a timely bunt single and scored a big insurance run in the eighth.

"I think it was a hitter's day today," Reds manager David Bell said. "You don't really try to change your approach too much, but it seemed like any ball that got up into the air had a chance to get out."

Dietrich's 13th homer tied it in the eighth. But the Cubs went ahead to stay on David Bote's RBI double against Jared Hughes (2-2) in the bottom half, and Kyle Schwarber added a sacrifice fly.

Dillon Maples (1-0) got two outs for the win after he was recalled from the minors before the game. Tyler Chatwood gave Chicago's weary bullpen a lift by working the ninth for his first save since 2017.

The Cubs also got some important length from Yu Darvish, who allowed six runs and 12 hits in seven-plus innings. Manager Joe Maddon was concerned about the bullpen coming into the day, and Darvish pitched past the sixth for the first time this season.

Cincinnati had a chance for another late rally after Eugenio Suárez hit a two-run homer in the ninth in Friday's 6-5 victory.

The Reds scored twice in the fifth to trim the Cubs' lead to 5-4. Suárez had an RBI single and Puig belted a long solo shot over the left-field bleachers.

After Heyward led off the fifth with a drive into the basket in left-centre, Reds rookie Nick Senzel hit a two-out RBI single in the sixth to make it a one-run game again.

Cincinnati put its first two batters on in the ninth, but Chatwood got Jesse Winker to bounce into a 3-6-1 double play and Puig flied out to right to end the game. It was Chatwood's third career save, continuing a nice comeback season for the right-hander.

After striking out Puig to end the seventh, Darvish had 100 pitches and appeared finished. But Maddon let the right-hander go back out for the eighth.

"He had his quickest inning the inning before," Maddon said. "I think it was a six-pitch inning and I thought he looked really sharp. With the shorter bullpen, I thought, 'Let's give it a roll.'"

Although it didn't work out, Darvish was pleased and considered the performance a positive.

"After the (eighth), I was frustrated, but the team won, so I'm so happy right now," he said.

Cubs: RHP Pedro Strop (strained left hamstring) was scheduled to throw a bullpen on Saturday, followed by another session on Monday or Tuesday. "He's getting very close," Maddon said. "Hopefully by the end of next week ... whether he's gonna go out (on rehab assignment), we should know by then."

Reds righty Tanner Roark (3-3, 3.51 ERA) faces lefty Jose Quintana (4-3, 3.30 ERA) Sunday in the finale of the three-game series. Roark, who is from nearby Wilmington, Illinois, is 4-1 with a 3.03 ERA in six games at Wrigley Field. Quintana allowed three runs in five innings at Cincinnati on May 16.