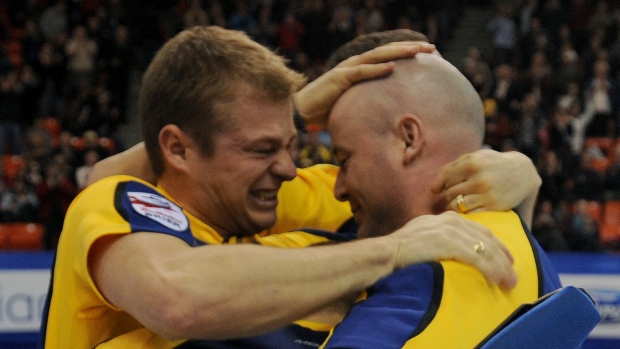 Prior to 1980, the Brier champion was determined by who finished first in the round robin. Once the winner take-all, championship tilt was instituted, drama quickly unfolded. Here are some of the best finals. 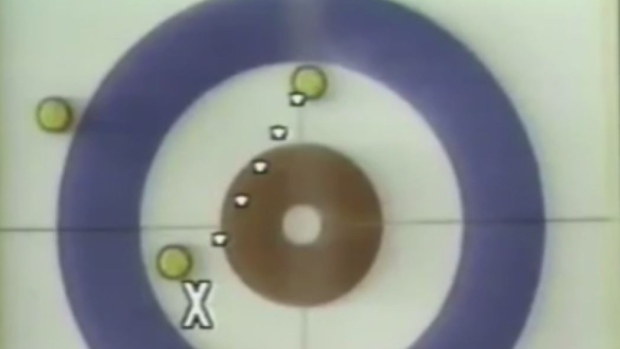 In 1985, Al Hackner won his second Brier in one of the most dramatic moments in curling history.

Hackner was forced to make a thin double takeout to stay alive, a shot that was seemingly impossible to execute at the time. The Ice Man made it flawlessly, stunning opponent Pat Ryan, the commentators and everybody in attendance.

Ryan was just too heavy on his last stone in the extra, giving Hackner the improbable Tankard victory. 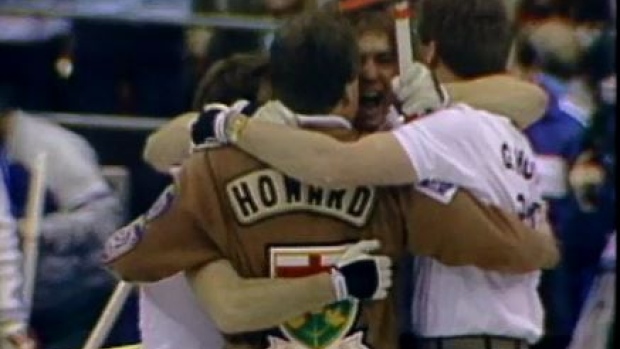 In the 1987 final in Edmonton, Ontario’s Russ Howard and British Columbia’s Bernie Sparkes went shot for shot with each other with Sparkes holding a slim 7-6 lead heading home after scoring three in the 9th end.

With his last stone in the 10th, Sparkes was too heavy on a freeze attempt opening the door for Howard to score a handful. Howard made no mistake and punched out Sparkes’ rock scoring five for the 11-7 win, a score that did not dictate how close this game was.

Despite coming up clutch on his final throw, Howard shot 79 per cent in the final while his brother and third Glenn Howard shot a blistering 91 per cent. It was the first Brier title for the Howard brothers. 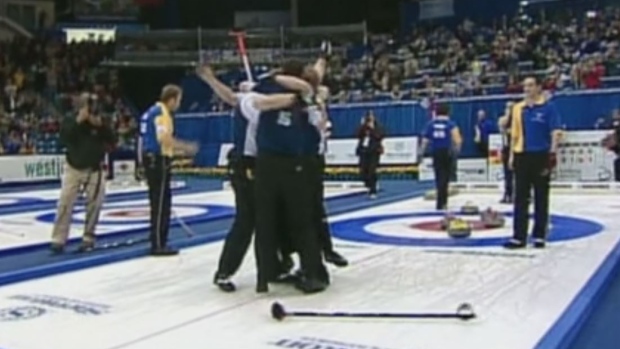 Few teams got the better of the famous Ferbey Four in the early 2000s as Randy’s boys from Alberta won four Brier titles in five years. Nova Scotia’s Mark Dacey can be blamed for preventing the five-peat.

Ferbey and Dacey squared off in the 2004 final in Saskatoon, a rematch of the previous year’s final where Ferbey won in a rout. It was going down a similar path once again with Alberta leading 8-4 after seven ends. Nova Scotia managed to put up a three-spot in the eighth before forcing Alberta to settle for one ninth, giving them the hammer, down by two in the final end.

The 10th was probably the tensest end in curling history. Alberta’s Marcel Rocque had enough of a fan harassing fourth David Nedohin, eventually shaking his fist and telling him “one more word and you’re mine.” On his next shot, Nedohin was heavy on a freeze attempt, opening the door wide open for Nova Scotia to score three and complete the improbable comeback on their final shot.

Dacey made the draw to the top of the button as the Maritime province captured their first Canadian championship since 1951 with the 10-9 victory.

The end to Ferbey’s reign in 2004 might be the greatest Brier final of all time. 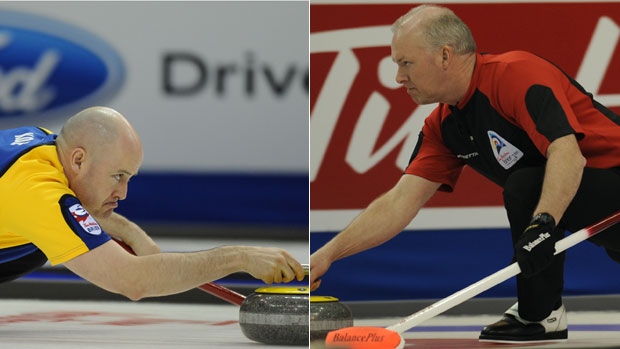 The 2010 final in Halifax was Kevin Koe’s coming-out party.

After playing second fiddle to Kevin Martin in Alberta for years, it was finally his turn to step into the spotlight. The skip, originally from Yellowknife, N.W.T, was playing in his first Canadian championship and advanced to the final against curling legend Glenn Howard after beating Brad Gushue and Brad Jacobs in the playoffs.

After playing nine close ends, Koe led Howard by one without hammer heading to the 10th and final end. The Alberta foursome were in trouble in the  end with Koe needing to make a very tough hack weight hit and roll to force Howard to one. The shot needed to be perfect for Alberta to have a chance. And it was. Howard drew for one, sending the final to an extra with Koe having hammer.

The cerebral skip then needed a draw to the button to win in the 11th. He didn’t flinch. The epic 2010 victory was sign of things to come over the next decade as Koe would go on win three more national titles, two world championships, and the Olympic trials.

2015 – Pat Simmons and John Morris Pull off the Switcheroo 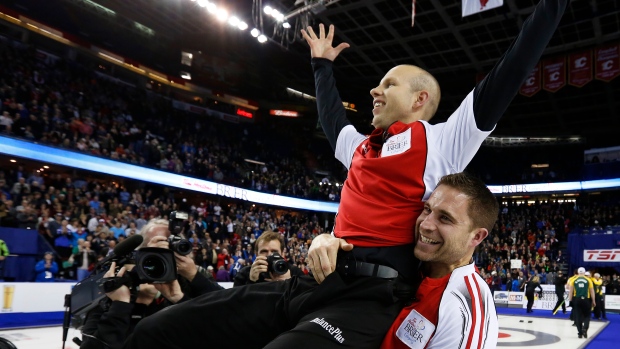 The story behind the 2015 Brier final in Calgary was just as amazing as the game itself.

The defending champs came into the week as the Brier’s first ever Team Canada after Curling Canada changed the format to mirror the Scotties Tournament of Heats. Furthermore, they also came in with John Morris as their skip – the man they beat in the previous year’s final – after Kevin Koe jetted in the off-season to form a super team.

The squad struggled early with a 2-3 start and were in danger of missing the playoff altogether. In an unprecedented move, Morris gave the skip reigns to Pat Simmons mid-week. The stunning swap worked instantly as Simmons led them to the final against Brad Jacobs.

The first four ends of the championship game were blanks for the first time in Brier history. Things heated up in the later stages with Team Canada taking three in the ninth before Northern Ontario sent the game to an extra with a deuce in the 10th.

It all came down to Simmons needing to “bite the white” to defend the Canadian championship. As Canada’s stone came to a rest, Simmons tossed his broom and raised his hands as a Canadian champ, finishing one of the wildest weeks in Brier history. 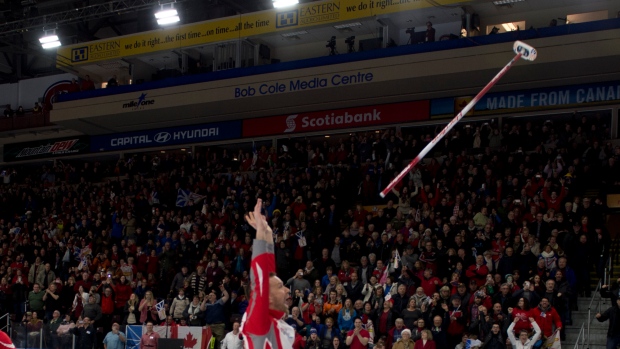 It was obvious who the crowd was cheering for in the 2017 Brier final.

Brad Gushue had a golden opportunity to win his first Canadian championship in front of hometown fans in St. John’s, Nfld., but had to get past rival Kevin Koe, the man who beat him in the Brier final the previous year. Prior to 2017, Gushue played in 13 Briers, making the playoffs eight times and losing in the title game twice. Newfoundland and Labrador’s lone Brier win came in 1976 thanks to the great Jack MacDuff.

It’s safe to say the pressure was on for Gushue and company.

The Newfoundlanders got off to a dream start, leading 5-1 at the break. Before they knew it Koe was right back in the game after making an incredible shot to score three in the sixth.

Like all great finals, it came down to the very last shot with Gushue needing a draw to the eight-foot to accomplish his dream.

Tension filled the Mile One Centre as for a few seconds it looked like the shot may come up light. It slid just far enough as Team Gushue celebrated harder than they had ever done before.

It was time to party on The Rock!

In the 1981 Brier final, Manitoba’s Kerry Burtnyk became the youngest skip to win the national title at just 22-years-old after scoring three in the last end to beat Northern Ontario’s Al Hackner, 5-4. 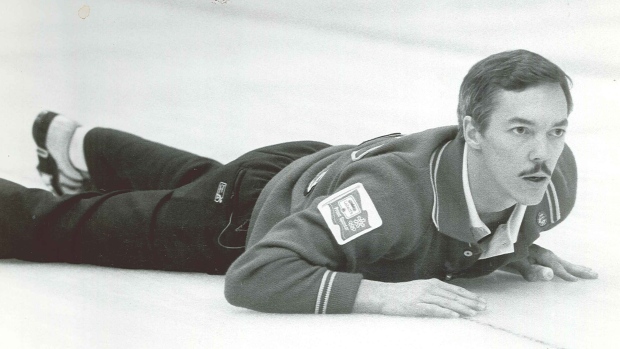 After suffering a devastating loss to Al Hacker in the 1985 final, Pat Ryan was on the other side of the heartbreak in 1988. Ryan and his Alberta rink scored three points in the 10th end to beat Saskatchewan’s Eugene Hritzuk, 8-7, after Hritzuk’s last rock picked on its way down the ice. Ryan defended his title a year later, beating Rick Folk, 3-2, in the lowest scoring Brier final in history. 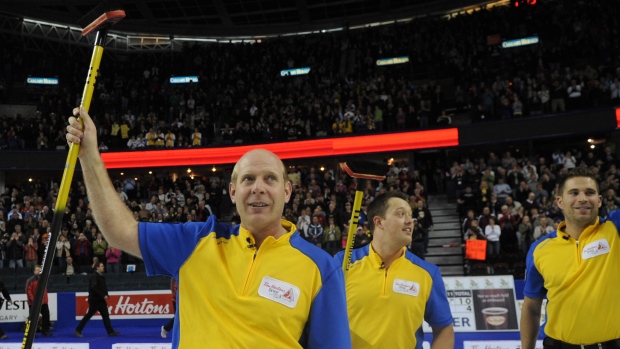 Kevin Martin has had his fair share of Brier drama as well.

In the 1996 final, he gave up a steal to Jeff Stoughton in the extra end to lose in heartbreaking fashion, 8-7. A year later he’d get back on track with a high-scoring 10-8 victory over Manitoba’s Vic Peters in the final.

The 2008 final in Winnipeg was one of the most highly anticipated Brier finals in history as it pitted Martin and fellow curling legend Glenn Howard, arguably the two greatest skips of all time, against each other. The contest may have failed to live up to its lofty expectations, but still came down to a last shot draw to the button, a shot Martin made with ease to capture his third Brier Tankard.