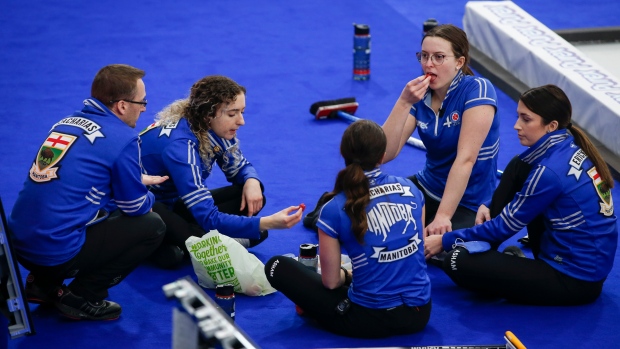 CALGARY — Plans to curl in a bubble had to include how relax and recharge between draws, since the athletes in the Canadian women's curling championship are confined to the arena and their hotel.

With the Scotties Tournament of Hearts in Calgary being held without spectators to prevent the spread of the COVID-19 virus, the women have more free time than they would normally have.

There are no autograph sessions with the public.

The Heart Stop Lounge, where curlers engage with fans via question-and-answer sessions, and where they might grab a beverage on a night off, isn't part of the experience this year.

Shopping, sightseeing, restaurant meals out with family and friends, or socializing with other teams at the hotel aren't either.

Puzzles, books, watching and streaming their favourite shows, board and digital games with teammates and video calls with family and friends who can't be in the Markin MacPhail Centre are common down-time diversions.

Quebec skip Laurie St-Georges' quest for a mental break from curling has forced her into a relationship taboo.

When Alberta skip Laura Walker returns to her hotel room, husband Geoff, who plays lead for Brad Gushue in the upcoming men's national championship, and their infant son Liam are there.

"We're just keeping a baby alive every day is what I'm here doing and curling in between," Walker said. "If he wasn't here, I'd probably be just lounging around watching "Free Britney" documentaries."

Kerri Einarson, skip of Team Canada, is catching up on the show "Yellowstone", while "Grey's Anatomy" is the go-to for Saskatchewan second Chaelynn Kitz.

"We've got a couple puzzles kicking around," Newfoundland and Labrador skip Sarah Hill said. "I think everyone has a book or two to read.

"Trying to keep it as casual as we can in our down time to just mentally step aside from curling for an hour or two so we don't have to do it all day long."

"There's so much more to the Scotties besides curling on the ice," Anderson said. "There's fans, there's the autograph sessions. You meet people, you see people from years past that have been going and watching for decades.

"You get to have conversations with some of the other curlers. We're not getting really any of that. We meet in the hallway and you might say 'hi'.

"You feel you can't do anything more than just say 'hi' and you don't even know who it is because they have a mask on."

But Ontario skip Rachel Homan is fine with just putting her feet up between draws because she's in her third trimester of pregnancy.

"There is a little bit more down time," Homan said. "Personally, it's not a bad thing that we don't have to run around from restaurants to different requirements.

"We wish friends and family could be here. That's definitely something we're all missing right now."

A dearth of televised curling games this winter because of the pandemic has Einarson's second Shannon Birchard tuning into other games when she's not on the ice.

Curlers who don't make the championship round will exit the bubble Friday and those who aren't among the three playoff teams head home Sunday. The semifinal and final are Sunday.

For those playing in a Tournament of Hearts for the first time in their lives, a bubble provides a less intimidating introduction for rookies.

"We've never been here before so we don't really know about the autographs and fans in the stands," Quebec third Hailey Armstrong said.

"It's nice to have some down time in the hotel. We're all students, so we have lots of homework to do as well."

This report by The Canadian Press was first published Feb. 22, 2021.