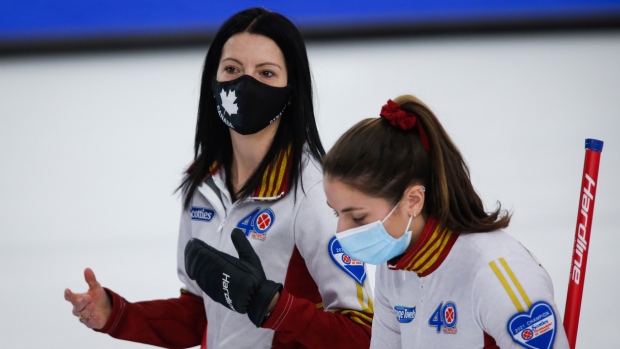 It will look different, feel different and sound different but it will still be curling. Championship curling.

On Friday evening, the Scotties Tournament of Hearts will get underway inside a carefully created bubble at the Markin McPhail Centre at WinSport in Calgary. It kicks off a month-long run of championship curling that will include the Tim Hortons Brier, the Home Hardware Mixed Doubles and the BKT Tires and OK Tires Men’s World Championship.

To get to this point has taken an immense amount of planning by Curling Canada, along with different levels of government, a variety of health and safety organizations, as well as TSN executives, to construct what they hope will be a COVID-free bubble.

For the curlers, it will mean a minimum of 12 days of rock isolation. Some, who are playing multiple events, are preparing for up to two months away from home. It will be a steady diet of curling rink to hotel and nothing in between.

No gyms. No restaurants. No signing autographs. No raising a glass with fans in the Patch, one of the great traditions of championship curling that separates it from so many other sporting events. Of course there won’t even be a Patch as there won’t be any fans, except those made from cardboard, positioned in the stands to add some atmosphere.

“We're just really thankful for the opportunity to have to play,” said six-time Scotties champion Jennifer Jones, “so I think we'll get over quickly.”

Even preparing for this championship has been tough. Some have gone to great lengths just to practice. None more so than reigning Scotties champion skip Kerri Einarson, who resorted to throwing rocks outdoors on Lake Winnipeg after not being able to find curling ice anywhere in Manitoba for two months.

“We were grasping at straws trying to find somewhere,” said Einarson. “Luckily enough my parents’ neighbour was building a skating rink and he asked if we wanted some room to throw rocks. So that’s what we did.”

Practice is one thing but most of the teams head into the Scotties with very little in the way of competition. Only a few regions held playdowns and almost every competitive event on the calendar was scrapped.

“We were able to play two events early in the season in Kitchener-Waterloo and so that was great,” said Jones. “And then after that, things were kind of cancelled and we didn't get the opportunity to play any more events. “

Einarson’s team of Val Sweeting, Shannon Birchard and Briane Meilleur has played even less than that – a total of three-and-a-half games, the half game coming when officials pulled the teams off the sheet mid-way through the contest. In most years, her team would have logged three-and-a-half games by September, likely in the first event on the schedule.

Despite the lack of games and the limited practice, most players expect the quality of play to heat up quickly.

“I'm hoping it's like riding a bike,” said Jones. “You just get back on the ice and everything picks up.”

“I think it’s still going to be really good,” Einarson stated. “There might be a few less chances taken early on until we get our feet underneath us.”

Not all the curlers were ready to make the commitment. Some opted out for safety reasons such as Jones’ regular lead, Dawn McEwen, who is expecting a baby in April. Lisa Weagle has replaced her.

Krista McCarville and her team from Thunder Bay were given the chance to represent Northern Ontario when the region’s playdowns were cancelled, but elected to take a pass due to the work and family commitments. The Krysta Burns rink from Sudbury will replace them.

Despite all the restrictions and the lack of practice, there are a few advantages to playing in a bubble, including what to put into the suitcase.

“I don’t have very many clothes because we won’t be going anywhere,” said Jones. “I'm just wearing comfy clothes all day long I think, and you don't need anything to go for dinner so it's actually an easier pack.”

The ability to wear loungewear is a massive bonus when you’re living in a bubble. But it’s one of the few. There is little doubt that this year’s Scotties will be as demanding off the ice as on it.

“It’s lonely, but we’re surviving,” said Einarson, who said she’d been surviving so far by diving into Netflix. She finished off Scandal and was moving ahead into Yellowstone. “This is where we want to be.”