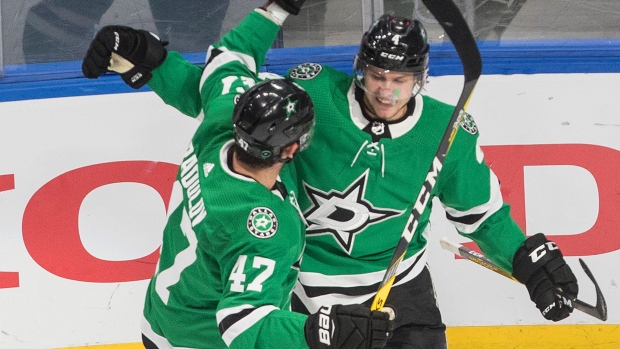 It is hard to recall a tougher playoff gauntlet in recent history than the one the Dallas Stars have faced this year, particularly since their first-round win over the Calgary Flames.

Entering the bubble, consensus was that four teams – the Boston Bruins and Tampa Bay Lightning out East, and the Colorado Avalanche and Vegas Golden Knights in the West – were the cream of the crop.

Dallas has proven this postseason that they can win in a variety of ways. The Stars proved capable in a high-flying, up-tempo second-round series against an Avalanche team with incredible offensive firepower. The Stars then faced a completely different animal in the Western Conference final. Vegas expectedly owned the puck all series long, hemming the Stars into the defensive zone on a regular basis. There, the Stars leaned on quality interior defence and white-hot goaltending from Anton Khudobin to advance.

Tampa Bay poses a different challenge. They have the individual shooting talent at the top of their lineup that compares well with the likes of Colorado, but they also can possess the puck for extended periods like Vegas. That’s why the Lightning have been regarded as the most talented team in the league for a few years now, and it’s tested Stars head coach Rick Bowness.

The most concerning of the issues facing Dallas is the fact that an exceptionally talented blueline has spent most of their time in this series surviving shifts. When you have stars like Miro Heiskanen and John Klingberg anchoring your top four (and really, your team), you need them dominating at both ends of the ice. But Heiskanen (playing with Jamie Oleksiak) and Klingberg (playing with Esa Lindell) have been bottled up all series long by Tampa Bay’s top-nine forwards, and the Bolts’ top line – the wondrous trio of Nikita Kucherov, Brayden Point and Ondrej Palat – has been running wild: 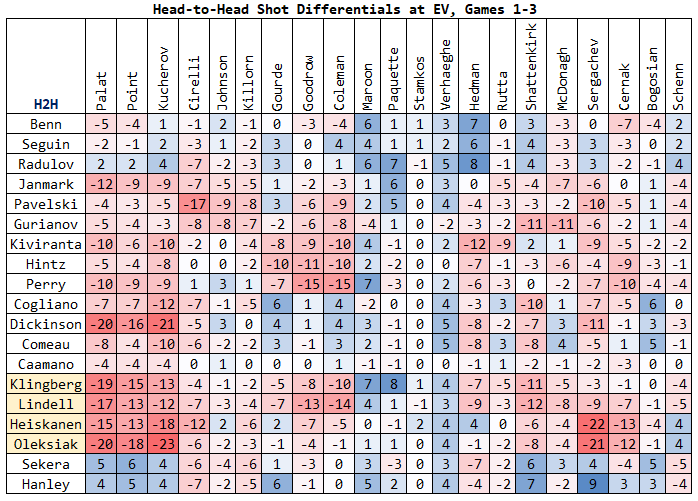 Shot differentials alone cannot speak to how well or how poorly the stars on the Dallas blueline have played, particularly since we know that Dallas is more amenable to trading perimeter-based zone time and a higher volume of shots to the opponent in favour of protecting the net-front. In fact, that tried-and-true recipe helped them dispatch the Golden Knights in just five games.

You can play that way and win – certainly so with a hot goaltender. But it is contingent on at least two factors: sustainable opportunistic scoring with limited offensive chances, or sustainable interior defensive play that forces opponents into low shooting areas: 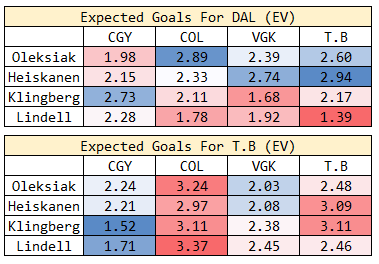 There is a bit of sampling noise here considering only three games have been played, but it’s quite clear that Tampa Bay is not Vegas – the Lightning will take that offensive zone time and funnel passes in tight lanes to shooters in the interior. Kucherov has done so a seemingly countless number of times. What’s happening is that the high shot volume against is now corresponding to a higher scoring chance volume against, and that is dangerous.

Again, this wouldn’t be the first time that someone cracked Dallas at even strength. The Avalanche, two rounds ago, had incredible stretches of continuously threatening attack, generally with Nathan MacKinnon on the ice. Although Dallas emerged victorious, it was not because of anything they did at even strength, where they were outscored 25 to 19. The big difference was lethal special teams at both ends of the ice.

The path to victory for Dallas at this point is obvious – they must slow down the speed of the Lightning, especially through the neutral zone. A good piece of that burden is going to fall on the shoulders of Dallas’ top-four defencemen, maintaining gap control away from the puck and breaking out cleanly when they do have the opportunity – the latter has been a growing concern.

They have met this challenge before. Let’s see if they can again in Game 4.