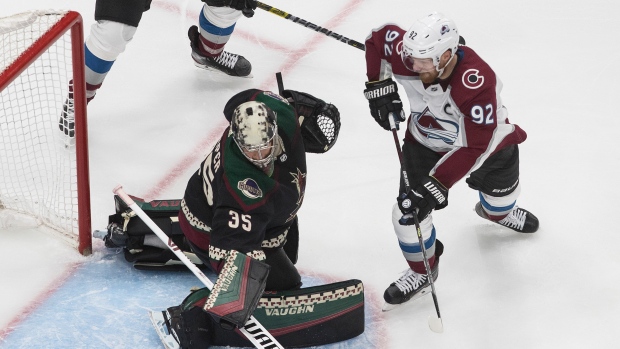 One monumental effort by Arizona's goalie and now the Coyotes are back in their series with the Colorado Avalanche.

Kuemper stopped 49 shots and the Coyotes held on to beat the Avalanche 4-2 on Saturday in Game 3 of the Stanley Cup playoffs.

Instead of going down 3-0, Arizona has life after pulling to 2-1 in the best-of-seven series.

“We've been talking about him all playoff long. He's been absolutely lights out,” Coyotes forward Derek Stepan said. “In those moments when we need a key save, he's gotten every single one.”

The Coyotes buzzed to start Game 3 and took their first lead in the series on Derek Stepan's first-period goal.

They spent the rest of the day counterpunching against Colorado's relentless pressure.

Andre Burakovsky scored for the second straight game in the second period during one Avalanche flurry, but Brad Richardson put the Coyotes up 2-1 in the closing seconds.

Kuemper was sharp as the Avalanche continued to push, making a series of difficult saves, and Taylor Hall scored on an empty net to seemingly seal it.

Mikko Rantanen scored with 1:03 left after goalie Pavel Francouz went to the bench for an extra attacker, leaving plenty of time for Colorado's potent offence to score the tying goal.

Lawson Crosue finally put it out of reach with an empty-net goal with 5 seconds left, giving the Coyotes a huge sigh of relief and a bit of life heading into Game 4 on Monday.

“They had the puck a lot tonight, let's be honest,” Coyotes coach Rick Tocchet said. “I thought we did a good job of our prevent defence.”

The Avalanche pressured the Coyotes just as they had in a Game 1 victory. They didn't end up with the same result, thanks to Kuemper and 27 blocked shots by Arizona.

“We're going to have to find a way to get in Kuemper's eyes a little bit more because if sees it, he's stopping it,” Avs coach Jared Bednar said. “He had a great night tonight.”

Colorado took advantage of Arizona's tentative play with three goals in the third period to win Game 1. The Coyotes were far more aggressive in Game 2, yet the Avalanche won 3-2 on Burakovsky's goal with 2:53 left in regulation.

Arizona had the early buzz going again in Game 3 and capitalized early when Stepan one-timed a shot from just outside the crease on a pass from behind by Clayton Keller.

Colorado picked up the pressure after falling into a hole for the first time in the series, but Kuemper was sharp, turning away a franchise post-season-record 20 shots in the first period.

“A lot of work, but it kind of keeps you in a rhythm,” Kuemper said.

The Avs continued the attack in the second period and tied it when Burakovky's shot caromed off Arizona defenceman Alex Goligoski's leg past Kuemper, right after the second of consecutive power plays.

Arizona snatched the momentum back with 34 seconds left in the second period, taking a 2-1 lead on Richardson's wrister from the left circle past Francouz.

The Coyotes spent most of the third period in their own end, but Kuemper bailed them out time and again with spectacular saves before the two empty-net goals sealed it.

“Obviously, we’d love to find the back of the net with all the chances we had today, especially in the third period,” Rantanen said. “It’s just one of those days where you just have to find the net.”

Notes: Arizona was without leading scorer Nick Schmlatz for the seventh straight game due to a head injury suffered in an exhibition game. ... The Avalanche played their 200th playoff game since moving to Denver in 1995. ... Colorado C Vladislav Namestrikov was out after leaving the second period of Game 2 with an injury, but RW Joonas Donskoi returned after missing a game. ... Arizona is 0 for 9 on the power play in the series after failing in three chances with the man advantage in Game 3.

Game 4 is Monday in Edmonton.