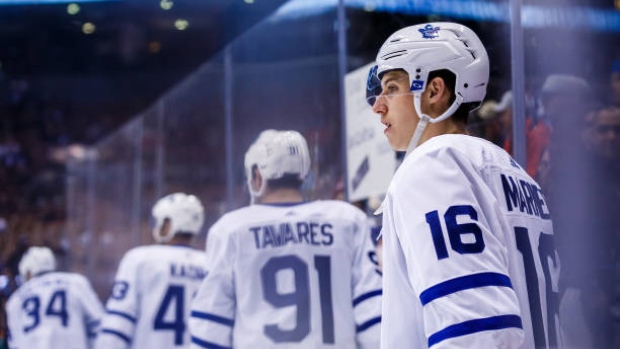 According to Mitch Marner's agent, Darren Ferris, the Maple Leafs winger was presented with two different offer sheets during the off-season before reaching a six-year, $65.36 million contract with Toronto on Friday.

"There were two presented to him in the summer, two opportunities which he declined and he told me 'Darren, I don't want to sign them, I want to be a Leaf,'" Ferris told First Up on TSN Radio 1050 Toronto on Monday. "So, we declined both of those opportunities and I know Kyle (Dubas) was aware of one them, the team had actually told him that they had made the overture to Mitch and there was a very strong likelihood there were more that would be presented once the season started as you know, the cap number gets set and makes it more difficult for a team to match.

"(Mitch's) goal always to be a Leaf and that was the conclusion. The Leafs organization worked hard, especially Kyle working tireless hours and he and I going back and forth, ups and down of normal negotiations and finally got the deal done in a timely fashion that he could get to camp. That's what Mitch wanted."

The Montreal Canadiens signed Sebastian Aho to the lone offer sheet of this off-season, a five-year contract which was quickly matched by the Carolina Hurricanes.  Aaron Portzline of The Athletic, though, reported in July that the Columbus Blue Jackets were among the teams who had spoken to Ferris about a potential offer sheet.

Marner confirmed on Monday that he did receive offer sheets, but never seriously considered signing one.

"Early in the summer, Marner said. "And the whole the goal of this was to be a Toronto Maple Leaf, so it wasn't in our head too much. As soon as Darren mentioned it, I told him right away I don't want to explore that option. Like I said, I didn't want to miss training camp, I didn't want to miss any games this season so that's why I really forced the issue with Kyle to make sure we got something done to get me here and I'm happy it happened."

The 22-year-old declined to say whether the either of the offer sheets were worth more than what he signed for in Toronto.

"I don't want to go into any of that," Marner said."Like I kind of told Darren, I didn't really want them so I didn't ask for too many details about it. I'm not going to get into that."

Marner, who led the Maple Leafs in points for a second straight season last year, will carry an average annual cap hit of $10.893 million on his new contract, the third-highest cap hit on the team. Ferris told First Up that Marner looked to Maple Leafs centres Auston Matthews and John Tavares as comparable contracts while he negotiated, rather than comparing himself to players around the league.

"Absolutely. That is one of the factors that you bring into it, that there is a comparison of players on his team, his teammates," Ferris said. "I'm sure when you go to work and you do the same amount of work as someone else does in your company you feel you should be compensated as fairly as them. It's hard for people to relate considering the dollars we talk about here, but remember players' careers are short, they're not long careers and in Mitch's case, he just wanted to be treated fairly and that we got to do at the end of the day, it completed a great contract for him and for the Leafs. He can remain a Leaf and not entertain any of these offer sheets that had been proposed and move on."

Ferris added that Marner never turned down a previously reported seven-year, $77 million offer - the same contract Tavares joined the team on last summer - during the negotiation.

“Now, when you say a proposed offer, we discussed numbers, those are numbers we all looked at. There were different numbers that were tabled over different time spans, but nothing was set in stone like, ‘Here, this is what we’re going to do,’ or ‘This is where we’re at.’ It’s a proposal for a discussion to talk around a number. Nobody declined an offer, no one accepted an offer at those points. We were just discussing the deal and from there that’s how we got this point.”

Marner scored 26 goals and posted a career-high 94 points in 82 games with the Maple Leafs last season.