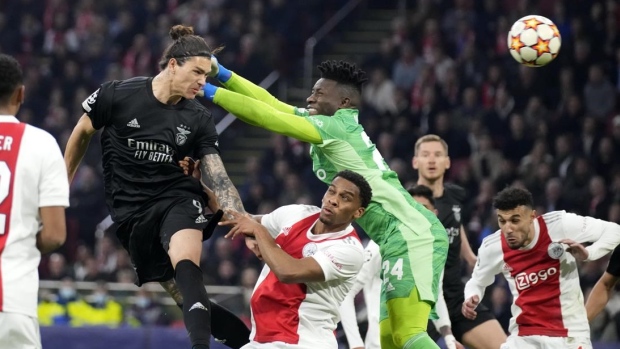 Ajax couldn’t halt a 26-year winless streak at home in the knockout rounds of the European competition on Tuesday, losing 1-0 to Benfica to waste a perfect campaign in the group stage.

Darwin Núñez scored late and Benfica reached the quarterfinals for the first time in six years. Núñez found the net with a 77th-minute header off a free kick from the right side to help Benfica make it to the last eight for the fifth time.

The teams had drawn 2-2 in the first leg in Portugal.

Ajax coach Erik ten Hag said he was “hoping for a moment of magic” in the end, but it never happened.

“Our positional play was excellent,” he said. “We were very good on the ball. I gave my players a big compliment. Maybe only the creativity was lacking. So it’s bitter that one moment of inattention means you’re eliminated.”

Ajax was one of three teams that won all six group-stage matches, along with Liverpool and Bayern. The Dutch club was in the last 16 for the second time since 2006, though it reached the semifinals the last time it got this far three seasons ago. It didn't win any of its home games in the knockout stage then either, with its last such victory coming against Borussia Dortmund in the 1996 quarterfinals.

Ajax had already equaled its most prolific Champions League campaign with 22 goals but struggled to capitalize on its chances despite dominating in Amsterdam. It had 16 total attempts against four by the visitors, which focused on defending well from the start.

Striker Sébastien Haller, the first player to score in his opening seven Champions League games and the quickest to reach 11 goals in the competition’s history, had a goal disallowed for offside early in the game.

“If we defend well, we know that in attack we have great players who can find the space to score at any time,” Benfica defender Nicolás Otamendi said. “We knew we couldn't give any chance to a team like Ajax."

Two-time European champion Benfica, which began this year's campaign in the third qualifying round, was eliminated by Bayern Munich in the 2016 quarterfinals.

The win extended Benfica’s unbeaten run in all competitions to eight games, though it was coming off a 1-1 home draw against Vizela in the Portuguese league on Friday.

In the other round-of-16 match Tuesday, Atlético Madrid advanced 2-1 on aggregate after beating Manchester United 1-0 in England.