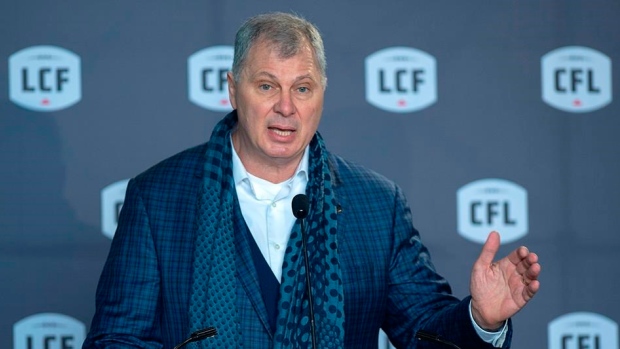 The CFL and its players association ended talks Saturday afternoon, opening the door to the league’s first players strike in nearly four decades.

With no new talks scheduled, here’s a closer look at the league’s latest offer to its players.

Roster changes beginning in 2023 — There will be seven (7) National Starters, one (1) of whom can be a Nationalized American as defined as any American player who has three years with the same team or four in the CFL. Teams have a choice between 20 or 21 nationals and one or two global players. Each team will have three quarterbacks.

Salary Cap — Beginning in 2023, cap will go up a minimum of $100,000 per season (double that of previous CBA). If 25 per cent of revenue growth sharing formula amount is greater than $100,000 then that number will be applied to cap annually.

Definition of revenue — Will use definition from previous CBA which gives union audit rights. The union and accountant have access to all financial records for review and audit.

Padded Practices —  Teams may have one hour of padded practice per week in one day during the Club’s regular season to a maximum of twelve.

Timing of season — The CFL can start the season up to 30 days earlier, commencing with the 2023 season.

Flexible Practice times — Teams may hold longer practices at certain times of the week, balanced by shorter sessions at other times. No overall increase in total practice time.

Increases in pre-season and post-season compensation based on hitting revenue threshold of $300 million. Increases of $100 per week for pre-season, $500 for post-season participation, $2,000 for Grey Cup losers and $4,000 for winners.