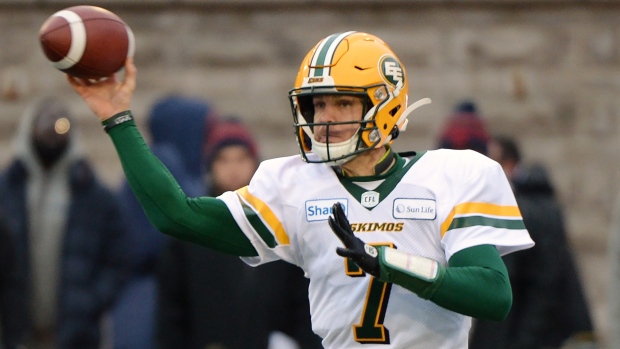 There’s no moment for a professional football team like the one when it sits down its franchise quarterback – knowing it’s possibly for good.

It’s a move the signals a loss a confidence, a shift in direction and is an invitation to the unknown.

That’s why Edmonton’s decision this week to demote starting quarterback Trevor Harris to third string is by far the most significant chapter in a season full of compelling drama in Elkland.

As the third-stringer, Harris won’t be in uniform when Edmonton hosts Winnipeg tonight.

There may be a strategic reason to dress Dakota Prukop as the No. 2 quarterback over Harris because of his skill in short-yardage situations, but the optics of having Harris healthy and in street clothes, well, that’s powerful.

The move comes after Harris’ horrible performance in last week’s 30-3 loss to the Blue Bombers. He was good on just 9 of 22 passes for 87 yards before being pulled in favour of backup Taylor Cornelius.

It was by far his worst game of a season. Harris had averaged 296 yards passing over his other five games. As recently as Labour Day, he threw for 398 yards and four touchdowns.

All of which raises the question of why Elks head coach Jaime Elizondo acted so aggressively to make a change at quarterback.

“The easy decision here would be to stay with Trevor and say I’ve gone to war with this guy, we’ve had success,” Elizondo told TSN this week. “The harder decision is to say I’m going with a guy who is playing his third CFL game. But my job is to make the best decision for the team.”

The move seems that much more drastic considering that Elizondo was presumably hired partly because of the success he enjoyed as Ottawa’s offensive co-ordinator with Harris as his quarterback in 2017 and 2018.

Edmonton general manager Brock Sunderland had gone all in on Harris the moment he realized Mike Reilly couldn’t be talked or bought out of going to British Columbia after the 2018 season, signing him to a contract that slotted him right behind Reilly and Bo Levi Mitchell in the league’s quarterback pay scale.

And in 2019 he delivered, completing more than 71 per cent of his passes for over 4,000 yards in just 13 games, with 16 touchdowns and six interceptions. During Edmonton’s playoff win over Montreal, he completed 36 of 39 passes for 421 yards.

This past January, Edmonton extended Harris’ contract through to 2022. Around the same time, they reunited him with Elizondo, the hope being that he could take his game to an even higher level.

So, how did this all go so bad, so quickly? How did it get to the point where Edmonton told Harris this week that he was free to go home?
It’s been known that Harris wasn’t happy about being sat down for two games in September with a neck injury, games he believed he could have played. But that seemed at the time like the adrenaline of a competitive athlete struggling with doctor’s orders.

Cornelius is a rare 6-foot-5 CFL quarterback with a big arm who moves well for a big man. But there hasn’t been much in his work so far that makes one believe he’s the answer to turning around a 2-6 season.

He’s thrown twice as many interceptions (six) as touchdowns (three) so far this season. He does, however, have a history with Elizondo from their days together with the Tampa Bay Vipers of the XFL. So, there’s a comfort level there.

The fact that Elizondo has more faith in an 0-2 rookie quarterback than a guy who has thrown for more than 24,000 yards, nearly 400 of which came just two starts ago, is bold at the very least.

There have been established starting quarterbacks who’ve been benched and managed to recapture their jobs. In fact, Harris was briefly elevated above Henry Burris in Ottawa midway through the 2016 season before Burris won the job back and led the Redblacks to a Grey Cup.
But this doesn’t feel like that. This feels like a turning point from which there may be no going back.

Vernon Adams gone for the season

In so many ways this season and last, the Montreal Alouettes have followed the path of their starting quarterback.

Like the Alouettes, Vernon Adams was resurrected in 2019, showing the potential everyone had imagined in leading Montreal back to the playoffs. Though there remains a rawness to his game, Adams has shown the skills and athleticism to continue improving.

His sense of leadership and ability to connect with his surroundings was on display when he appeared during pre-game Monday wearing a Carey Prince sweater in tribute to the Canadiens goaltender who recently entered the NHL/NHLPA’s player assistance program.

But what becomes of the Als now that Adams is lost for the remainder of the regular season with a shoulder injury? What path does this team follow without him?

Since Anthony Calvillo played his last game for Montreal in 2013, Adams is the quarterback with by far the best winning percentage at .630. All others have a combined .337.

The early returns on that were surprisingly positive on Monday when Matthew Shiltz emerged from the bench to lead Montreal to a game-winning touchdown. Shiltz was good on all three of his pass attempts as he efficiently drove his team on seven plays through the Ottawa defence to the end zone.

Shiltz is intriguing just for the fact that he’s been able to stick around so long, having joined Montreal during desperate times in 2017.

He’s completed 105 passes for 1,267 yards, five touchdowns and nine interceptions. Out of Butler University, a school better known for basketball than football, his perseverance suggests there are people in the organization who believe in him.

We’re about to see if they are right.

CFL quarterbacks are on pace to have their worst collective touchdown-to-interception ratio since 2009.

And that’s with B.C.’s Michael Riley on pace to have one of the best touchdown-to-interception ratio seasons ever, with 10 touchdown throws against just a single pick so far this season.

There are a few of obvious reasons for all the picks, starting with the number of starting quarterbacks injured this season. With Shiltz due to make his first start of the season for Montreal this week, Winnipeg and Saskatchewan will be the only teams that have started the same quarterback all season.

Additionally, every team except Montreal, Hamilton and Calgary has been working with a different offensive co-ordinator than they did in 2019.

And roughly 30 per cent of the players on opening-week rosters were new to the CFL.

That much turnover and new blood has made for a lot of errant throws so far this season.

Although it’s not just newbies tossing picks. Cody Fajardo and Bo Levi Mitchell, the West Division’s two most recent nominees for Most Outstanding Player, have combined for 13 touchdown passes and 18 interceptions.

All these picks are a big part of why defences have had the upper hand through most of this season.

A tough season for the Ottawa Redblacks would be a whole lot tougher were it not for the player who shifts field position every time the ball is exchanged.

DeVonte Dedmon is the best returner in the CFL these days and it’s not close. It’s not close statistically or on the highlight reels.

Out of William and Mary, the same school that produced another elusive CFLer named Pinball Clemons, Dedmon is the CFL’s all-purpose yardage leader, a race he’s running away with like he does on the field.

His 1,725 all-purpose yards are 803 yards ahead of his nearest competitor. And he is a workhorse, handling punt, kickoff and missed field goal returns, while also taking his turns at running back. The Redblacks are trying to take advantage of every bit of his talent.

There was no better demonstration of Dedmon’s impact on a game than in Ottawa’s win over Edmonton, where he racked up 250 return yards.
Every attempt Edmonton made to claw back into a game they’d fallen behind in early was thwarted by Dedmon moving field position. It negated Ottawa’s weakness on offence and forced young Elks quarterback Taylor Cornelius to manage longer fields. And he took one back to the house.

Quarterback Caleb Evans was understandably the focus after that game. But that overshadowed a brilliant all-around performance for Dedmon, who was the most important player on the field that night.

If National Football League scouts aren’t all over this guy, they ought to be.

With just little more than two minutes remaining of a tie game between Saskatchewan and Calgary, Stamps quarterback Bo Levi Mitchell took off on a second-and-10 play at the Calgary 51-yard line, knowing a first down would allow Calgary to keep possession, kill the clock and potentially kick a game-winning field goal.

Rushing the ball isn’t something Mitchell does often. His scamper late against Saskatchewan was his fourth running play over the past two seasons.

To observers, it appeared that Mitchell was taking no chances taking a hit, despite circumstances that might have dictated he risk taking a shot or two to gain a first down.

It turns out his slide five yards short of the first-down marker had nothing to do with self-preservation.

Mitchell explained afterward that he thought he heard teammates on the sideline telling him he was about to be caught from behind, presenting a high risk for a turnover. So instead, he slid.

It turned out it didn’t matter. The Stamps punted, their defence got the ball back, and they won the game on a field goal.

And inadvertently, Mitchell managed to avoid taking a hit.