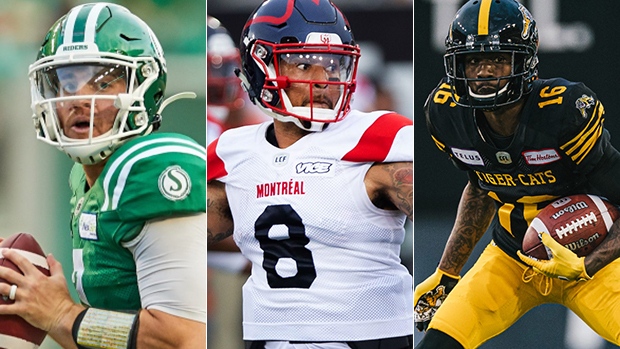 Perhaps the C in CFL these days could stand for Change because 2019 has been a season that’s marked a definite changing of the guard when it comes to the league’s top players.

Just consider the nine team nominees for Most Outstanding Player. Only one of them, Edmonton quarterback Trevor Harris, was nominated for this distinction a year ago, when he was the Redblacks’ nominee.

The other eight are newcomers to this stage. There are four receivers (B.C.’s Bryan Burnham, Toronto’s Derel Walker, Hamilton’s Speedy Banks and Calgary’s Reggie Begelton), two quarterbacks  – neither of whom began the season as a starter – (Montreal’s Vernon Adams and Saskatchewan’s Cody Fajardo), a defensive end (Winnipeg’s Willie Jefferson) and a linebacker (Ottawa’s Avery Williams).

Similarly, of the nine nominees for Defensive Player of the Year, seven are new, with only Jefferson and Toronto’s Cleyon Laing back from a year ago.

Even among the Most Outstanding Canadian nominees, where the pool of elite players is smaller, there are eight new faces, with only Edmonton’s Kwaku Boateng nominated in back-to-back years.

Overall, there’s been a more than 85 per cent turnover among those nominated for top player, defensive player and Canadian.

The trend of change in the CFL is nowhere better illustrated than at the quarterback position.

There are currently just two quarterbacks in the league who have won a Grey Cup. And of the six teams qualified for the playoffs, at least half of them will have a quarterback making his first playoff start.

It’s been a season where a new crop of stars have established themselves. Now they’re ready to leave their mark on the playoffs.

The name of Winnipeg Blue Bombers star running back Andrew Harris was nowhere to be found when the CFL’s nine teams released their nominees for the league’s annual year-end awards this week.

That, on the surface, might have seemed like a surprise, since Harris is not only the top Canadian on the Blue Bombers – most would argue he is also the team’s best player. Instead, those nominations went to Jefferson and special teamer Mike Miller. Jefferson has had a great year, but, on most teams, a star defensive end isn’t valued more than a running back who leads the league in rushing and leads his team in receptions.

But Harris’ candidacy for the league awards had been in doubt from the moment he was handed a two-game suspension for a positive PED test back in August. That left his fate in the hands of voters who make up the Winnipeg chapter of the Football Reporters of Canada. The vote was not unanimous, but Harris failed to get the support necessary to proceed to the national stage.

It’s hard to think of a more divisive issue than whether Harris should have been given consideration for year-end awards. There is no CFL policy on such matters and the league did not try to influence the Winnipeg vote.

Some argued that Harris was under no further sanctions after serving his suspension. The other side of the debate concerns what kind of precedent voting for Harris sets and how it looks on the league to potentially have a Most Outstanding Player who tested positive for a PED in the same season.

There were passionate arguments on both sides; some specific to Harris’s case and some based more on principle. Meanwhile, the league refused to become involved, presumably for fear of backlash from Harris or the Canadian Football League Players’ Association if it tried to institute a rule in the middle of the season.

But here’s the one thing that (hopefully) everyone can agree upon: The CFL needs a policy on whether a player who tests positive for a PED can remain eligible for postseason awards.

The absence of a league stance left the matter in the hands of the Winnipeg chapter voters, even though it really wasn’t a local matter.

The National Football League has a rule stating that players who test positive are not eligible for end-of-year awards.

There were many reasons to temper expectations of Zach Collaros heading into last week’s debut as starting quarterback for the Winnipeg Blue Bombers.

He’d only been with the team for about two weeks, had just two full practices of starting reps, hadn’t played a full game in roughly a year and was facing one of the league’s best defences and hottest teams.

All of which made his performance, completing 22 of 28 passes for 221 yards, two touchdowns and an interception, all the more remarkable.

Consider that Collaros threw more completions and for more yards against Calgary than he averaged in his previous two seasons as the starter in Hamilton and Saskatchewan.

He also demonstrated the one thing Chris Streveler had not for Winnipeg: the ability to bring his team back late in a game by pushing the ball down the field through the air.

It’s widely assumed that Collaros’ performance was enough to earn him the start for the Western Semifinal against either Saskatchewan or Calgary. Beyond that, however, is the question of what this does for Collaros’s future and how a similar performance or two might affect the off-season quarterback market, where he’s scheduled to be one of many free agents on the market, along with Matt Nichols, Jeremiah Masoli, Nick Arbuckle, MacLeod Bethel-Thompson and others.

Regardless of how he plays this postseason, the biggest concern about Collaros will continue to be his durability. Collaros suffered four head injuries over a period of 13 months, from June of 2018 until June of 2019, which was his last appearance before last Friday’s game for Winnipeg.

With that in mind, expect whatever interest he receives this off-season to be positioned with a base salary in the $150,000-$200,000 range, and plenty of playtime incentives on top of that, carrying him to the $350,000-$400,000 range if he starts and remains healthy throughout.

That’s in the range of what he was offered last month for 2020 by former Toronto general manager Jim Popp, who couldn’t get the deal approved before being fired. But it's a step down from the $310,000 base salary he received last off-season to return to Saskatchewan.

The Toronto Argonauts parted ways with Popp in early October, but the matter of who will coach them next season remains to be determined.

If Chamblin isn’t back, there’s a chance Pinball Clemons could step into that role, although there is palpable buzz around the league that Toronto will make a play for Winnipeg head coach Mike O’Shea, a former player and member of the coaching staff who doesn’t have a contract for next season with the Blue Bombers.

Meanwhile, in B.C., the picture is clouded by the presence of owner David Braley, who has been in the process of selling his team since last winter.

Although Braley insists he remains committed to selling and the league is hopeful of having new ownership in place for the start of next season, Braley recently said he would be doing a full review of football and business operations. That’s not the kind of thing done by someone about to hand his team to new ownership, so we are left to wonder what the plan is. A disappointing year could result in changes, with first-year head coach DeVone Claybrooks and his staff the most vulnerable.

In Ottawa, the freefall this season has gone from bad to worse, with a 2-0 start turning to 1-14 over the past 15 games for the Redblacks. Most of the criticism has been directed at general manager Marcel Desjardins, who let a slew of high-quality free agents walk last off-season – most notably quarterback Trevor Harris. When you’re 5,000-yard passing quarterback goes elsewhere, you better have a quality plan to back him up and Desjardins did not.

The loss of Harris and others, compounded by the late off-season loss of offensive co-ordinator Jaime Elizondo, put Ottawa’s offence in neutral and the defence wasn’t good enough to keep things close.

Desjardins and head coach Rick Campbell are the only GM and head coach the Redblacks have ever had. The sense is that getting to three Grey Cup games the past four years will buy them a year to fix the current mess, as it should. But changes to staff are surely coming, with the biggest off-season needs being finding a quarterback and offensive co-ordinator that can rescue a team that’s averaged just 15 offensive points per game.

LFA Draft another step in CFL 2.0

Most of the attention on the CFL’s international plan has been on identifying and recruiting the best players from foreign leagues to come to Canada, a strategy the league will intensify this coming off-season.

But another phase will be rolled out Friday when Mexico’s Liga de Futbol Americano Professional (LFA) holds its first draft of Canadians, selecting from players whose CFL aspirations have come up short but still want to continue pursuing their dreams.

These are players who may have attended the CFL combine, been drafted or attended a training camp, but weren’t ready for the CFL and are looking for opportunities to develop.

The CFL sees this is a way to strengthen the quality of play in the Mexican league while developing homegrown talent that may one day return and be added to the CFL’s domestic player pool.

The CFL is also looking to formalize similar arrangements with leagues in Europe.