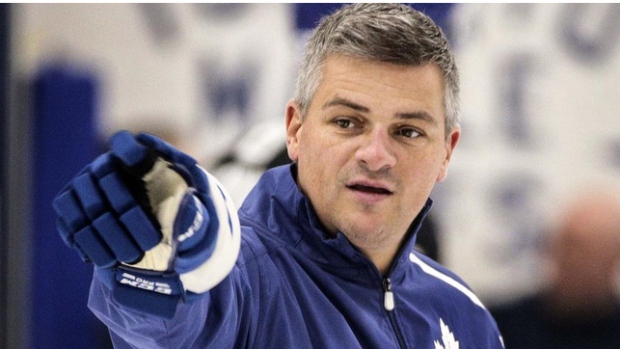 TSN Toronto reporter Mark Masters checks in daily with news and notes on the Maple Leafs, who practised in two groups at the Ford Performance Centre on Tuesday.

Two days into his first training camp as Maple Leafs head coach, it's crystal clear what Sheldon Keefe is focused on.

"I don't think it's any secret that we got to be a lot better defensively," he said after Tuesday's workout. "There's no area of our game defensively that we were satisfied with. We're not kidding ourselves here. We know there's a lot of areas we need to look at and frankly it's every area. From all three zones, everything that we're doing there, we're either tweaking it and making changes structurally to how we were playing or we're having more focused intensity and commitment to the habits and detail within it."

In 23 games under Mike Babcock to start this season, the Leafs allowed 3.43 goals against per game, which ranked 24th in the National Hockey League. After Keefe took over the number dipped to 3.04, which ranked 17th in the league in that stretch of 47 games. So, there's still plenty of room for improvement.

"We fully expect our guys to be a lot better defensively when we come back here and, of course, we're going to need to be given what's at stake," Keefe said. "That's the greatest area of opportunity for us to grow as a team so that's our focus here."

Keefe said his initial priority after taking over in November was to get the highly skilled Leafs playing to their offensive potential and, sure enough, the team led the league in scoring after the coaching change. But getting a group that has long struggled defensively to take another step in that area proved a trickier needle to thread. The hope is this truncated training camp will be a turning point and allow Keefe to really put his imprint on the team.

"For him it's huge to establish things and make more concrete changes," said veteran forward Jason Spezza. "He will be able to go over the details more thoroughly. We had an understanding of what he wanted, but now we have a chance to work on it for a longer period of time so this is a great opportunity to get on the same page."

And for the first time all season, the blueline is completely healthy, which should provide a big boost. Although Keefe was quick to point out this is a team-wide issue.

"When we talk about our team getting better defensively, it's easy of course to focus on the defence, but our message here throughout this camp is that it's not just on the defence," Keefe said. "Our forwards have got to do more work and we've got to be a five-man unit in how we defend each zone and a lot of the work falls on the forwards. That's where we need to get a lot better."

Justin Holl revealed that the team is looking at incorporating some new plays that will help them break out more smoothly. But, he also said the defence core believes it can take a step when it comes to playing in their own end.

"As defencemen, we can do a better job of killing plays down low," Holl said. "So if a team gets on the cycle or maybe they rap it back down from the point to relieve some pressure, it's about making sure we kill those plays and not allow other teams to get moving on us and feeling good about themselves."

Defence is the main priority, but it's not the only one. On Tuesday, much of the on-ice work focused on special teams.

"It's a huge part of any season, but in the playoffs it can make or break you so we wanted to get right at it," Keefe said.

Toronto’s special teams units at practice on Tuesday looked the same as those we saw during the season.

"You got to get used to where the refs are out there," said Nylander. "Even coming into the zone and setting up, it's different because they take up space. That was a great aspect to be put in there."

The officials actually would've been at Monday's scrimmage, but needed to go through COVID-19 testing.

"Any time we're doing any sort of scrimmaging, we'd like to have the officials involved if we can," Keefe said. "Even though we were doing special teams, we still think it adds a little bit of a game element to it. Certainly the professionalism of the faceoffs and the way that things were called, we missed having them on the ice. Just the fact that you have four extra bodies out there, that in itself is different and I think it's important. We're trying to get up to speed to game feel and intensity and all those things as quickly as possible."

Keefe says five more scrimmages are planned at training camp with a longer one scheduled for Wednesday. There will also be more special teams scrimmages as well. The coach credited the players for their diligence in Phase 2, which helped the coaching staff move into more advanced stuff right from the start of camp.

"We got so much work done in Phase 2 that we really believe has put us ahead of the game here in terms of conditioning and some of the things we were able to get done there," Keefe said. "That has allowed us to really be, in my opinion, ahead of where we thought we might be at this stage. We've been able to try different things and do different things and have a greater volume of work and special teams is something we've been able to move up and we're happy to do so because it is very important."

On Tuesday, Nylander spoke to the media for the first time since the season was paused back in March. The 24-year-old winger revealed that he spent the first two months of the pandemic with his brother, Chicago Blackhawks winger Alexander Nylander, in Florida.

"It was a lot of fun. It had a been a long time since we spent that much time together," Nylander said. "We were playing video games and tennis every day. We played probably about 45 matches and I think he was up one or two."

After exploding for 31 goals in 68 games in the regular season, Nylander is now looking to prove himself in the playoffs.

"That's where all the big players show up ... I think ... my game this year will help me become a dominant player in the playoffs."

In the final game before the pause, Nylander was reunited on a line with Matthews and Hyman and that trio has remained together to open training camp. Keefe said he didn't spend too much time thinking about what to do with his combinations during the pause.

"Just before the pause we had made that switch so I felt strongly enough about it at that time," Keefe said. "The main goal of having Mitch play with Auston when he did was just to see what that chemistry would be like with a bigger sample. Really liked what we saw from it, obviously, we saw great success with it and now we have confidence in that if we decide to switch back at any time. I think if I've shown anything it's that I wouldn't stick with anything for too long that isn't working.

"But I also believe that Mitch is a great player that's good no matter where we put him and he certainly had great chemistry with John. We need to have two very good lines. We think that Mikheyev will bring a lot to that. That said, we've got two weeks here and I expect to move things around a little bit here and there just to try different things and get guys comfortable with each other and renew some chemistry. I expect it to move around a fair bit, but we like the fact that really within that top-six forward group we've got lots of combinations that can work."

After being deemed "unfit to play" on Monday, defenceman Timothy Liljegren was removed from the training camp roster. Mac Hollowell took his spot on Tuesday.