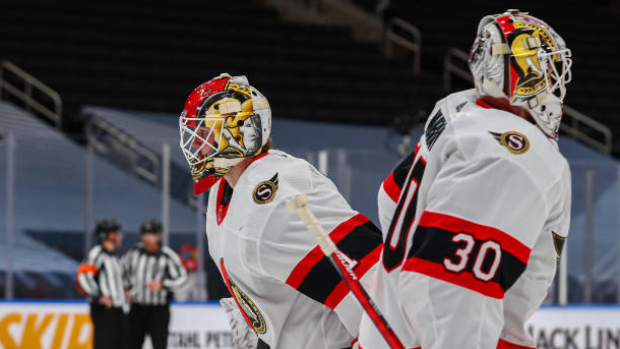 The Ottawa Senators dropped their eighth straight game on Sunday and centre Derek Stepan admitted the losses are beginning to take their toll on the team.

"It's a fragile group, there is definitely no doubt about it," Stepan said after the Senators 8-5 loss to the Edmonton Oilers, per NHL.com. "I've been through this before, no one is feeling bad for us. We have a lot of guys learning things. We have some veterans finding their way here in a new group too. We have a lot of moving parts and I look at our third period, and say what you want, in an 8-3 game, we pushed a little bit, and that's a start. I think we have to start just chipping away at little victories."

While Stepan saw positives in the loss Sunday, head coach D.J. Smith said he'd rather see the team put the game behind them as soon as possible.

"Certainly, we have to flush it, you can't let it linger, but we're going to have to look at it and see what happened," Smith said. "Four power-play goals, it's pretty easy to see what happened tonight. And you're playing catch-up all night against a team that has as much power as they do. It's one of those ones, it's probably best to flush."

Sunday's loss dropped the Senators, who have not won since defeating the Toronto Maple Leafs in their opening game on Jan. 15, to 1-7-1 on the season. They will face the Oilers again in their sixth straight road game Tuesday, having been outscored 30-11 on the trip so far.

Goaltender Matt Murray got the start Sunday but was pulled just under eight minutes in after allowing three goals in nine shots. Marcus Hogberg turned aside 17 of the 22 shots he faced, but with both goaltenders struggling, Smith said postgame he has not ruled out calling up goaltender Joey Daccord from the taxi squad to start in the future.

"We have to use every player that's available to our disposable and that's a guy we're going to have to think about," Smith said of Daccord.

Daccord split time last season between the ECHL's Brampton Beast and AHL's Belleville Senators. He has one career NHL start in his career, allowing five goals in a loss to the Buffalo Sabres late in the 2018-19 season.