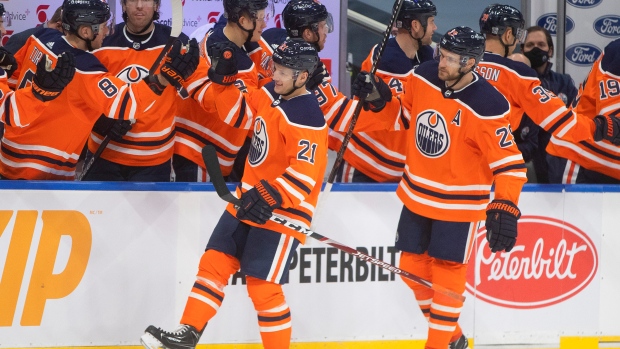 EDMONTON — Leon Draisaitl was one assist away from matching a record held, in part, by a Canadian icon, and he had no idea. But the German forward feels much more content with the two points his team earned Sunday night.

Draisaitl and teammate Connor McDavid combined for 11 points in an 8-5 Edmonton Oilers victory over the Ottawa Senators Sunday night at Rogers Place.

McDavid scored a goal and added four assists, while Draisaitl had six assists. The German forward was one assist away from tying the single-game record for assists held by Wayne Gretzky and Billy Taylor Sr.

"I was not aware of that. It's not something I pay too much attention to," Draisaitl said.

Oilers goalie Stuart Skinner made 33 saves on 38 shots in his NHL debut, earning his first career victory. Skinner was a third-round selection of the Oilers back in 2017.

"It was nice that we got up a couple and the guys in front of me were playing really good tonight. Obviously, they potted out eight goals. That obviously helped," Skinner said.

Edmonton (5-6-0) now has back-to-back wins under their belt for the first time this season. Meanwhile, the Senators (1-7-1) are on an eight-game winless streak after Sunday's loss.

Of course, being on the man-advantage allowed the Oilers' big stars to rack up points against the Senators.

Senators goaltender Matt Murray allowed three goals on nine shots before being pulled in the first period for Marcus Hogberg. The Swede made 17 saves in a relief appearance.

Smith did not rule out calling up goaltender Joey Daccord from the taxi squad to give his team another option in net for a future game.

"We have to use every player that's available to our disposable and that's a guy we're going to have to think about," Smith said.

It took eight seconds for the Oilers to open the scoring. Off a faceoff win by Draisaitl in the Senators zone, Kahun took the pass from his centre and fired a shot towards the net. The puck deflected off Senators' forward Josh Norris's stick and went past Murray into the goal. It was the first shot on goal for both teams.

James Neal would later make it 2-0 for the Oilers with a power play goal. He deflected a shot from Ryan Nugent-Hopkins past Matt Murray at 15:45 of the opening period. McDavid picked up his first point of the night off the goal.

The Senators scored their first of the night nearly 90 seconds later. Colin White batted the puck out of mid-air after taking an Evgenii Dadonov pass from behind the net. Following a video review, the referees determined it was a good goal.

Tyson Barrie restored the Oilers' two-goal lead with his first goal with his new teammates. He joined the Oilers in the off-season as a free agent after spending last season in Toronto. He fired a shot from the blue line that went through forward Alex Chiasson's legs and eventually through Murray. Both McDavid and Draisaitl each picked up an assist on that one.

That would be it for Murray after allowing three goals on eight shots.

Neal would later add his second of the period before Nugent-Hopkins added his first of the night to make it 5-1. McDavid and Draisaitl again combined to get assists on the Nugent-Hopkins goal.

Brady Tkachuk and Drake Batherson both scored a goal to bring the score to 5-3 before the end of the first period.

McDavid scored his lone goal of the game 42 seconds into the second period. It was his team's fourth with the man advantage, as well as his fourth point of the game. Darnell Nurse and Kailer Yamamoto also scored in the period.

Draisaitl assisted on all three goals scored in the second.

Ottawa Senators rookie Tim Stutzle scored his team's fourth goal of the night in the third period. Seconds later, forward Austin Watson made it 8-5 with a shot from the point, making the score a little more respectable.

But it was still too little, too late for the Senators to catch up to Edmonton's dynamic duo.

NOTES: Before puck drop, Senators forward Tim Stutzle posed for a photo with fellow Germans and opposing forwards Leon Draisaitl and Dominic Kahun of the Edmonton Oilers...Senators defenceman Thomas Chabot was unavailable Sunday night due to injury, opening the door for Artem Zub to make his NHL debut...Wayne Gretzky had three seven-assist games in his career...The Senators and Oilers will renew hostilities Tuesday night in Edmonton...

This report by The Canadian Press was first published Jan. 31, 2021.