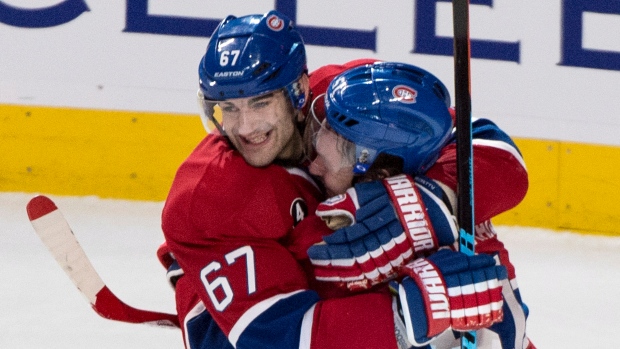 MONTREAL - Like so many times this season, the Montreal Canadiens left things late.

Down a goal for most of Tuesday's 2-1 victory over the Philadelphia Flyers, Montreal found its equalizer late in the third period before scoring the winner in overtime.

"We had a slow start," said head coach Michel Therrien. "But we started the second with intensity. The compete level was there for us. We kept pressing the game and pushing.

"This is a group of guys that refuses to lose. They showed a lot of character and found a way to win."

The Canadiens were kept off the scoreboard until Tomas Plekanec tied the game at 12:38 of the third period by shovelling a loose puck under goaltender Ray Emery after a scramble in front of the net.

Montreal has scored nearly half of its goals — 65 of 138 — in the final frame this season.

In overtime, David Desharnais scored the winner at 3:27 after scooping his own rebound over Emery's shoulder.

"The pass came back to me, and I took the shot," said Desharnais, who now has two goals in his last four games. "I didn't realize at first that the puck had gone in. It's good to contribute, especially in overtime, but the most important thing is the victory."

Carey Price stopped 23-of-24 shots he faced for his 30th win of the season. Emery, who is replacing the injured Steve Mason, made 39 saves in defeat.

The Flyers (23-22-9) stunned the Bell Centre crowd early on as Matt Read scored on the team's first shot 51 seconds into the game. Read beat a partially-screened Price glove side with a wrister for his first goal in 25 games.

The game's first five minutes treated fans to a goal, breakaways by Claude Giroux and Max Pacioretty, and a shot by Desharnais that rang off the iron. Afterwards, the pace slowed drastically. The Canadiens took just seven shots on Emery in the first.

Things picked up again in the second. Price stopped Jakub Voracek on a 2-on-1, and the Canadiens netminder barely moved to deny Sean Couturier on a breakaway seconds later.

Scott Laughton failed to increase the Flyers' one-goal advantage when he hit the post five minutes after that.

That's when Montreal went to work, peppering Emery's net with 17 shots in the second, and another 12 in the third.

"They got more momentum and got better and better," said Mark Streit, whose Flyers are eight points out of a playoff spot. "We got a point, but maybe in a few months, this is going to be the point that's missing. Every game is almost like a playoff game."

The Canadiens continue their three-game homestand when they host Edmonton on Thursday.

Notes: Manny Malhotra and Mike Weaver did not play for Montreal. Luke Schenn (day-to-day with an upper-body injury) was a late scratch for Philadelphia. … Prior to puck drop, fans at the Bell Centre held a moment of silence for former Canadiens coach Claude Ruel, who passed away on Monday. … The Canadiens went 0-for-3 with the man advantage.