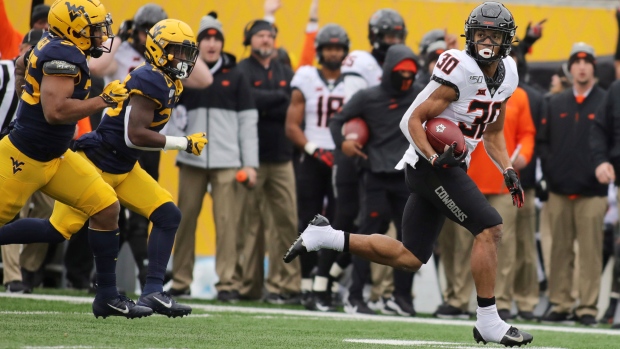 The Heisman Trophy has been in the hands of the greatest running backs in U.S. college football history, names such as O.J. Simpson, Barry Sanders and Ricky Williams, to name just a few.

But it doesn’t appear that Oklahoma State Cowboys’ Chuba Hubbard will be added to that list.

This despite a spectacular season in which the Sherwood Park, Alta., native has led the NCAA in rushing yards pretty much from start to finish, establishing himself as one of the most exciting players in American college football.

The 20-year-old will get one more chance to flash his talents for Heisman voters when Oklahoma State faces the (10-1) University of Oklahoma Sooners on Saturday, in a game which Hubbard enters with 1,832 yards rushing, a 147-yard lead on Wisconsin’s Jonathan Taylor. In 11 games this season, he’s broken the 100-yard rushing mark 10 times, broken the 200-yard rushing mark four times, and scored a touchdown in every game but one.

Not bad for a kid who played his entire high school football in the Edmonton area, most noted for his breakaway speed which allows him to burst through holes with tremendous acceleration for huge gains. Hubbard leads the nation in runs over 20 yards, 30 yards, 40 yards, 50 yards … well, you get the idea.

And there are plenty of stats that would seem to make him Heisman-worthy, including his 11-game rushing total that is higher than that of six of the past 12 running backs to win the award. He’s already blown past the season rushing totals of former winners Mark Ingram, Reggie Bush, Bo Jackson and Earl Campbell.

Week after week, game after game, Hubbard is largely dismissed as a serious candidate for the 2019 Heisman Trophy.

Part of it may be the fact that Oklahoma State is 8-3 on the season and at mid-season dropped three of four games during September and October. The four players ahead of Hubbard are all on teams ranked within the top-5. Oklahoma State is ranked 21st. But since the Heisman is an individual award, it’s not clear why that should work against Hubbard.

A bigger factor appears to be the way the award prioritizes quarterback play above all else.

Consider that of the 18 Heisman Trophy winners since 2000, 15 have been quarterbacks.

How much has the Heisman Trophy changed? Consider that between 1972 and 1983, the award was won exclusively by running backs.

Those were the days when college football offences were built heavily around their abilities to run the ball, days of the triple-option and the wishbone, when passing merely complemented the ground game.

As college football began to change, so too did the Heisman.

Between 1984 and 1999, six running backs won the award compared to seven quarterbacks (the other winners include wide receivers/punt returners and a cornerback) as college football evolved into more of a passing game like the NFL.

Since then the award’s emphasis on quarterbacks has sharpened, with eight of the past nine Heismans going to quarterbacks. Two Alabama running backs – Ingram in 2009 and Derrick Henry in 2015 – are the only two players at that position to win the award since Bush in 2005.

There was a time when running backs were the stars of college football, grinding out yards as the engines of offence, with the passing game more complementary. But those days are gone.

If this were the 1970s or ’80s, Chuba Hubbard would be running away with the Heisman – finalists for the award will be announced Dec. 9 before the announcement ceremony Dec. 14 – the way he runs away from defenders for those huge gains.

Instead, he’ll have to be satisfied with being the best running back in college football.​