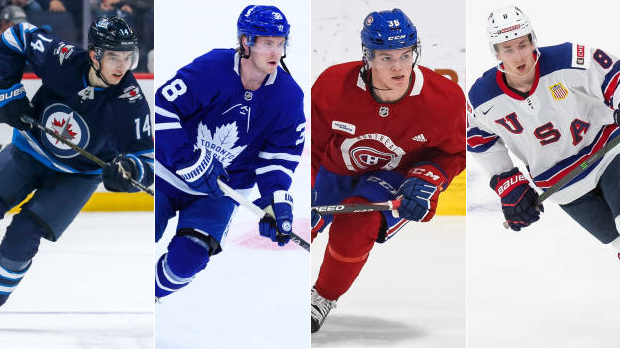 While the Detroit Red Wings have struggled over the past few seasons, there’s plenty of hope and excitement for the future with two of their high-end players in the top three of our annual NHL-affiliated prospects ranking.

At No. 1 is Moritz Seider, who was 25th on last year's list. The 6-foot-3, 200-pound German blueliner has elevated his play to the next level with his size, physicality, puckhandling and offensive skill. Drafted sixth overall in 2019, he has the makings of a future No. 1 defenceman.

Red Wings prospect Lucas Raymond, taken fourth overall in last October's draft, is No. 3 on our list. The winger, whose style of play is similar to Toronto Maple Leafs star Mitch Marner, has six goals and 18 points in 34 games with Frolunda in the SHL this season.

In second spot is Montreal prospect Cole Caufield. The Wisconsin Badgers right winger was the top scorer in college hockey, is the favourite to win the Hobey Baker Award as the NCAA's best player, and captured gold with Team USA at the World Juniors.

Caufield, who signed his three-year entry-level contract last weekend, looks ready to turn pro and make a contribution with the Canadiens. Drafted by Montreal in 2019, he has elite scoring ability. The Habs don't have a player like him in their current lineup, so they should give him a chance and see if he can bring that scoring touch.

Spencer Knight, who signed his first contract with the Florida Panthers this week, is the top-ranked goaltender in our 75-player ranking. The 19-year-old had a 16-4-1 record at Boston College this season with a 2.18 goal-against average and .932 save percentage. He also helped lead the U.S. to gold at the World Juniors in January.

Knight's college teammate Matthew Boldy, a left wing who signed with the Minnesota Wild this week, comes in at No. 5, while Knight's potential Panthers teammate Anton Lundell, a centre, checks in as our sixth-ranked prospect.

A couple of blueliners are up next with Ottawa's 2019 draft pick Jake Sanderson seventh and Edmonton Oilers prospect Philip Broberg at No. 8.

Centre Dylan Holloway, our ninth-ranked prospect, was a dominant player in college hockey after the World Juniors – likely the second-best college player after his Wisconsin teammate Caufield. Defenceman Nils Lundkvist of the New York Rangers rounds out the Top 10.

On the team side, the Toronto Maple Leafs lead all Canadian franchises with five players in the Top 75 – defenceman Rasmus Sandin (No. 14), forwards Nick Robertson (No. 18), Rodion Amirov (No. 57) and Nicholas Abruzzese (No. 67) and defenceman Topi Niemela (No. 73).

There's plenty to like in the Leafs' system, with Sandin and Niemela named the best defencemen at the 2020 and 2021 World Juniors respectively, Robertson leading the OHL in goal scoring last season, and Abruzzese leading NCAA freshman scoring last year.

The Oilers and Senators are next with four players each. Joining Broberg and Holloway in Edmonton's crop are blueliner Evan Bouchard (No. 43) and goaltender Stuart Skinner (No. 71).

Ottawa has the University of North Dakota trio of Sanderson, Jacob Bernard-Docker (No. 44) and Shane Pinto (No. 61), as well as defenceman Erik Brannstrom (No. 19). Bernard-Docker and Pinto both signed their entry-level contracts on Thursday and could get a look in Ottawa's lineup soon.

The Canadiens, Calgary Flames and Winnipeg Jets each have three players. Joining Caufield on Montreal list are blueliners Kaiden Guhle (No. 36) and Mattias Norlinder (No. 62), while Calgary has forwards Connor Zary (No. 37), Jakob Pelletier (No. 51) and goaltender Dustin Wolf (No. 58). Jets blueline prospects Ville Heinola (No. 12) and Dylan Samberg (No. 39) and forward Cole Perfetti (No. 27) make the list.

The Vancouver Canucks have just one prospect in the Top 75 - right wing Vasili Podkolzin ranked 50th.

The team with the most prospects in our ranking? It's good to be the Kings, with seven players – forwards Arthur Kaliyev (15th) Quinton Byfield (17th), Alex Turcotte (22nd), Rasmus Kupari (33rd) and Samuel Fagemo (74th) and defencemen Brock Faber (23rd) and Kim Nousiainen (69th) making the list.

Note: The first column in the table below indicates the prospect’s placement in our 2020 ranking:

Top 5 Prospects From Each Canadian Team