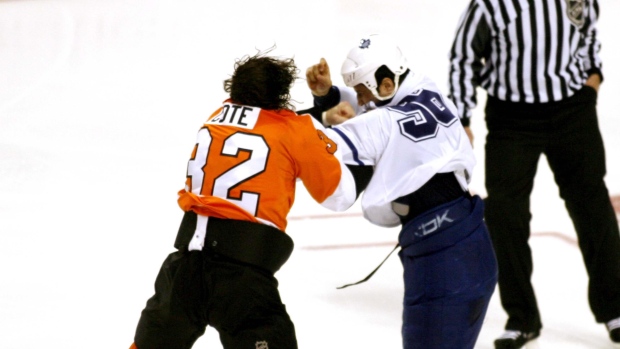 Andre Deveaux, who played in 31 NHL games for the Toronto Maple Leafs and New York Rangers from 2008 to 2012, had his contract terminated by Swedish club Rogle BK following a pre-game attack on Vasteras captain Per Helmersson before a playoff game.

The incident occurred last Thursday before the teams were set to face off, as Deveaux slashed at the leg of an unsuspecting Helmersson before striking him in the back of the head and taking him to the ice. The incident went undetected by officials and Deveaux played that night. Helmersson wasn't seriously injured and played in the remaining two games of the series.

“We as a club condemn the incident,” said Eriksson. “It is an unacceptable behavior and nothing we as a club [stand] behind … We have talked to Andre today about the incident and jointly decided to go [our] separate ways."

Deveaux spoke to Swedish daily Expressen, where he expressed remorse for the incident.

“The emotions took over for me there for a few seconds," said Deveaux. "Although my reputation seems to precede me, I am not a violent person. If anything, perhaps a passionate player. My intent was never to inflict any serious injury."

The first Bahamian player in NHL history, Deveaux, who was originally drafted by the Montreal Canadiens in the sixth round of the 2002 NHL Entry Draft, played in 20 games for Rogle this season, where he amassed six goals, three assists and 67 minutes in penalties.

Rogle, relegated from the Swedish Hockey League following the 2012-13 season, won promotion back to the top tier of Swedish hockey and reportedly intended to extend the 31-year-old Deveaux's contract next season had they been promoted to the SHL.