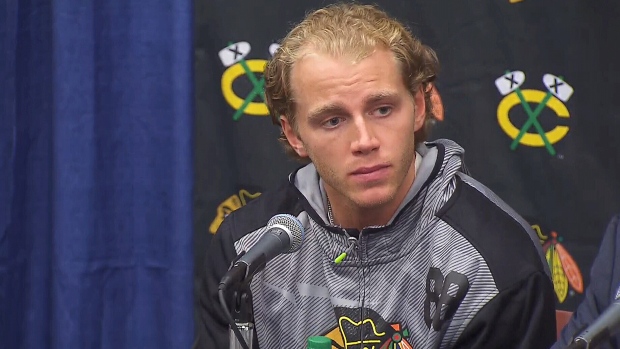 Erie County district attorney Frank Sedita has called a news conference for 11 a.m. ET on Friday to address tampering allegations made in the investigation of Blackhawks forward Patrick Kane.

The lawyer for the accuser in the alleged sexual assault investigation, Thomas Eoannou, announced on Thursday night that he is withdrawing as his client's representative on the case. Eoannou said that he's no longer comfortable representing the woman because of how her mother reported finding an evidence bag that once held the woman's rape kit.

That news comes on the heels of a Wednesday news conference where Eoannou said that evidence in the case has been tampered with, setting off a head-spinning day of developments and denials.

Eoannou said the bag once containing evidence from the rape kit performed on his client at Erie County Medical Center in early August was anonymously delivered to the doorstep of his client's mother.

The evidence bag was found by the alleged victim's mother at 1:30 p.m. on Tuesday, Eoannou said.

Eoannou said the rape kit evidence bag is "authentic" and the authenticity was "confirmed" by Erie County Medical Center staff on Tuesday. The evidence bag was ripped open, according to Eoannou, who also showed pictures of the torn evidence bag, and said there were no contents inside.

Two hours after Eoannou's press conference, the Erie County (N.Y.) Commissioner of Central Police Services refuted Eoannou's claims in a statement, calling into question the legitimacy of the bag allegedly delivered to the accuser's mother's house.

The Hamburg, N.Y., Police Department also issued a statement following Eoannou's press conference saying their documented handling of the evidence is "unassailable," and promising to cooperate with "any authorized investigation regarding the handling of evidence and the procedure as such."

Kane, 26, has been under investigation by police in Hamburg, N.Y., for an alleged sexual assault which allegedly occurred at his Western New York home on Aug. 2. No charges have been filed in the investigation.