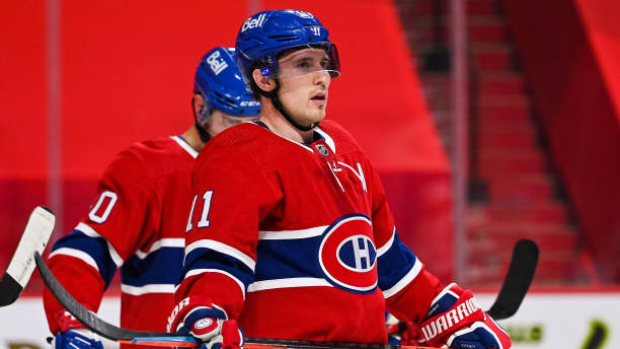 The Montreal Canadiens will continue to try to lock up their playoff spot without Brendan Gallagher and Carey Price.

Gallagher, who skated with the team in a non-contact jersey Monday, has not played since fracturing his thumb on April 5. He was originally expected to miss about six weeks.

Price, 33, has been sidelined since April 19 with a concussion. He took to the ice Monday as morning skate was wrapping up to work with goalie coach Sean Burke and the scratches. In the interim, Burke will be preparing Jake Allen, Cayden Primeau and Charlie Lindgren in the event they have to be the Habs’ goalies for the playoffs.

Ducharme said Monday he did not have update as to whether Jonathan Drouin, who is currently taking a leave absence from the team, would return for the playoffs.

"Not yet, we’re not into that. That’s not an issue right now,” the head coach said.

#Habs Ducharme was vague when asked whether Drouin might return for the playoffs: “Not yet, we’re not into that. That’s not an issue right now.” @TSN_Edge

Team captain Shea Weber skated before practice Monday. He was back to using a right-handed stick after protecting his left hand by carrying a left-handed one last week during his on-ice sessions. Weber, however, still isn’t shooting pucks yet.

The Canadiens need one point against the Oilers tonight (TSN2 Regional, 7pm et) to secure their postseason berth.