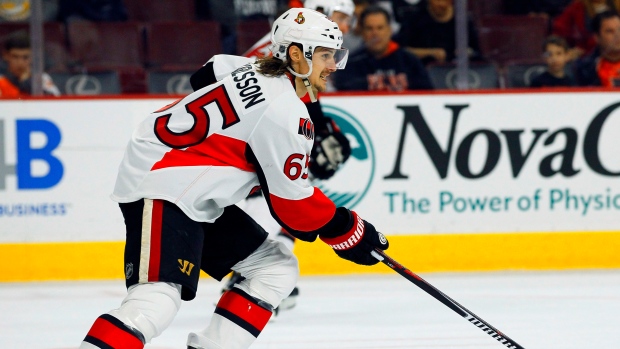 Drew Doughty of the Los Angeles Kings, Erik Karlsson of the Ottawa Senators and P.K. Subban of the Montreal Canadiens were voted as the three finalists for the trophy that's awarded "to the defence player who demonstrates throughout the season the greatest all-round ability in the position."

Doughty played all 82 games this season for the Kings and was second in the league for average time on ice at 28:59. The 25-year-old native of London, Ont., produced seven goals and 46 points. Doughty is a Norris Trophy finalist for the second time after finishing third in voting in 2009-10.

Karlsson led all defencemen in points for the third time in the past four seasons with 66 — including a career-high 21 goals. The 24-year-old Swedish blue-liner appeared in all 82 games for the second consecutive campaign and ranked third in average time on ice at 27:15. This is the second time he is a Norris Trophy finalist after capturing the award in 2011-12.

Subban also skated in all 82 games and registered career highs in goals with 15 and points with 60. The 25-year-old Toronto native ranked sixth in average time on ice with 26:12 — another career high. He is a Norris Trophy finalist for the second time after winning the award in 2012-13, when he became the first Canadiens defenceman to earn the honour since Chris Chelios in 1988-89.

Members of the Professional Hockey Writers' Association submitted ballots for the Norris Trophy at the conclusion of the regular season, with the top three vote-getters designated as finalists. The winner will be announced June 24, during the 2015 NHL Awards.