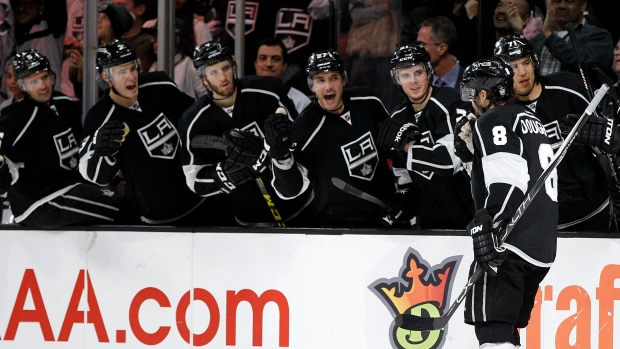 LOS ANGELES, Calif. - After dominating the Florida Panthers for the first 36 1-2 minutes and having just a 1-1 tie to show for it, the Los Angeles Kings finally broke through against an overworked Roberto Luongo.

Drew Doughty and Anze Kopitar scored 55 seconds apart to lead the Kings over the Florida Panthers 4-1 on Saturday.

Jeff Carter and Milan Lucic also scored, Jonathan Quick made 18 saves and the Kings beat Florida at home for the seventh straight time.

"If we had the answers for how to score in this league, I think we'd have a few more," Kings coach Darryl Sutter said. "Most of the goals are scored through special teams, through one-timers and through jam plays around the net. Tonight they were all scored like that."

Nick Bjugstad scored for the Panthers. Florida has lost five straight games and hasn't scored a third-period goal in any of them.

"They play a man's game," coach Gerard Gallant said about the Kings. "We still have some kids in there, and we have to step up. You learn a lot of things when you play a team like them."

Luongo has lost nine of his last 10 starts against the Kings, the only win coming last Feb. 5. He stopped 31 shots, including a breakaway by Lucic with 4:50 left in the second period to keep it tied. But the Kings outshot Florida 20-4 during that period and quickly grabbed a 3-1 lead.

Doughty's first goal of the season came on a power-play one-timer from the left circle that trickled through Luongo's pads with 3:21 left in the period. Kopitar then scored during a goalmouth scramble.

Lucic got himself in perfect position in the low slot to redirect Carter's centring pass from the right boards with 8:37 into the third for his third goal this season.

But Bjugstad opened the scoring with 29 seconds left in the period by beating Quick to the stick side with a 35-foot wrist shot. It came just 35 seconds after the Kings' goalie was stung by a 40-foot slap shot from Brandon Pirri that struck him on the left side of the mask.

Carter tied it with 6:44 left in the second, beating Luongo to the stick side with a one-timer from the left circle after getting a pass from Tyler Toffoli. Derek Forbort, the 15th overall pick in the 2010 draft, also got an assist for his first NHL point.

NOTES: Kings radio play-by-play man Nick Nickson will be inducted into the broadcasters wing of the Hockey Hall of Fame on Monday afternoon in Toronto. Nickson, in his 35th season, is the third Kings broadcaster to receive the Foster Hewitt Award. Bob Miller was inducted in 2000, and Jiggs McDonald in 1990. ... RW Dustin Brown's season-opening goal drought reached 14 games, his longest from the start of a season since the first 17 games of his 2003-04 rookie campaign. The Kings' captain has taken 49 shots on net. ... The Panthers haven't won at Staples Center since a 5-2 victory on Nov. 27, 2002, when the goalies were Jani Hurme and Felix Potvin and the coaches were Mike Keenan and Andy Murray. ... Florida D Dmitry Kulinov played in his 400th regular-season game. ... Jaromir Jagr needs three goals to tie former Kings centre Marcel Dionne for fourth place on the career list at 731. ... Quick came in 4-0 with a 1.25 goals-against average against the Panthers at home. ... Florida LW Jonathan Huberdeau, the third overall pick in the 2011 draft and 2013 Calder Trophy winner as the league's top rookie, has no goals in his first 14 games after scoring a career-high 15 last season.