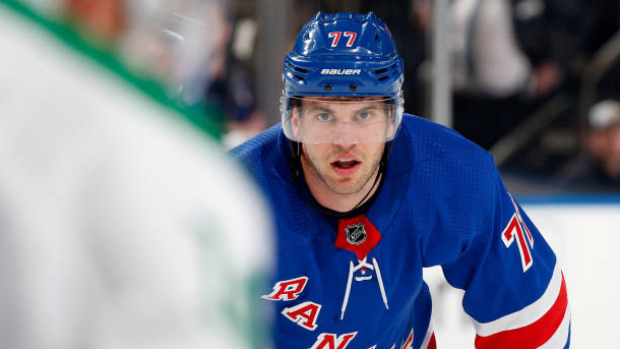 It appears Tony DeAngelo could have a new home this week after his falling out with the New York Rangers.

TSN Hockey Insider Darren Dreger reports there's been no shortage of interest in the defenceman since Rangers general manager Jeff Gorton declared Monday that DeAngelo had played his last game for the team.

"Keep an eye on Tony DeAngelo of the New York Rangers. We know that he’s been told to go home and await a trade, and there’s a ton of interest in him all of a sudden," Dreger said on Insider Trading. "I’m told, according to source, that DeAngelo could be moved within the next few days."

The 25-year-old went unclaimed after being waived on Sunday following a reported physical altercation with goaltender Alexander Georgiev after the Rangers lost on Saturday night.

Gorton, who declined to give specifics, said Saturday's incident was a final straw for DeAngelo, who was a healthy scratch for the second and third games of the season following an unsportsmanlike conduct penalty in their 4-0 season-opening loss to the New York Islanders, something that player "wasn't able to move on from."

“I had spoke to him at that time and said: ‘Listen, if there’s any more issues here, the time is going to come where we’re going to put you on waivers and move on. No more issues. If your name is in anything at all that we have to hear, we’re going to move on,’" Gorton recalled. “I made that statement to him, something happened and I pretty much have to stay true to my word here and the organization’s word that it was time to move on."

Dreger reported Monday that DeAngelo's agent Pat Brisson and Gorton were talking with teams with trade interest in the player. He added Brisson was confident in a deal coming together in the near future.

He signed a two-year, $9.6 million contract in October and carries a $4.8 million cap hit.