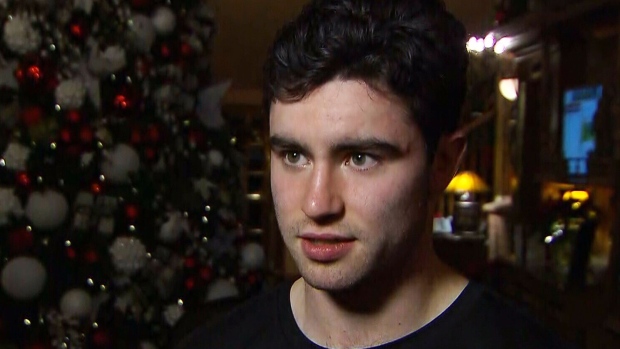 TSN reporter Mark Masters checks in daily with news and notes on Team Canada, which practised at Meridian Credit Union Arena in Niagara-on-the-Lake, Ont., on Saturday.

It was at the end of a team-building activity on Saturday night that head coach Dominique Ducharme addressed his players and announced who will wear letters for Team Canada at this year's World Juniors. Calgary Flames prospect Dillon Dube will serve as captain with Kale Clague, Dante Fabbro and Victor Mete the alternates.

“It’s crazy," said Dube, one of three returning forwards on the team. “It's exciting for me and my family and, overall, it’s going to be a great experience.”

Dube believes his ability to process the ups and downs of a short event will serve him well in his new role.

"When things are down, when we have some tough games, it's just about staying positive," he said. "Going through it last year with the pressure and being able to handle it, now I can pass it on to guys that haven't been through the pressure that this tournament will put on you."

“Just resiliency," said Fabbro when asked what he learned last year. "We fell short of the gold medal, but if you can take bits and parts of what we did well and bring it back to this team and implementing that into the locker room it will definitely help a lot. I know the guys coming back this year are pretty keen on making sure we finish the job.”

Mete, meanwhile, brings a different dynamic to the leadership group, because he has NHL games on his resume this season. His mindset with the Canadiens was that he couldn't afford to slip at all because he may lose his job.

"Going through what I’ve gone through this year can kind of help here in a short-term tournament," the defenceman explained. "We need to kind of be at our best every game, can’t slack at all, because if you lose one game that could be the end of it.”

Fabbro (lower body) was a full participant in Saturday's practice marking the first time he has skated with teammates since Dec. 15 when he left the Selection Camp game against Denmark midway through the third period. Fabbro fell a couple of times during the workout and was shaking his left foot on a few occasions. He didn't answer questions about the injury when he was made available for an interview following the leadership group announcement.

“I thought he looked fine," Ducharme said after practice. "I haven’t had time to talk to Dante or the doctor so we’ll see. We’ll take it one day at a time. We thought he’d be on the ice today and he was and now we have to look at how he was reacting to that.”

Fabbro was paired with Josh Mahura, who was recalled by the team last week as an insurance policy in case Fabbro isn't ready for the event.

Conor Timmins, who missed Friday's game, was also a full participant at practice skating in his usual spot opposite Mete. The Sault Ste. Marie defenceman blocked a shot with his hand in Wednesday's game, but is expected to be ready for the Boxing Day opener against Finland.

The only player who missed Saturday's practice was Carter Hart.

Goalie coach Eric Raymond filled in during the workout.