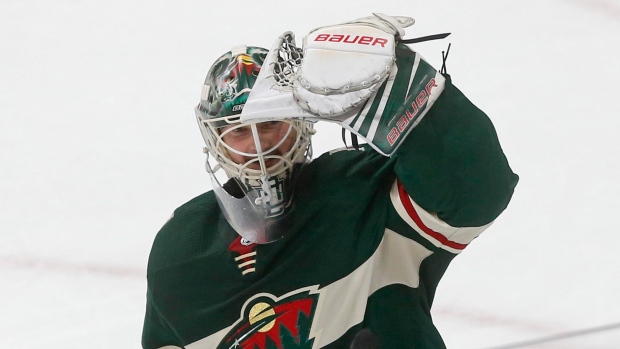 ST. PAUL, Minn. — One streak ended for the Minnesota Wild, but another one was extended to a franchise record.

Devan Dubnyk posted his third straight shutout with 30 saves and Nino Niederreiter scored 12 seconds into the game for Minnesota in a 3-0 win against the Philadelphia Flyers on Tuesday night.

Dubnyk's third shutout of the season stretched his scoreless streak to 195:05, breaking the previous team mark of 183:16 that he set last season. Dubnyk has stopped all 103 shots he's faced in the past three games, including consecutive shutouts of Philadelphia.

"I feel confident in there," Dubnyk said. "The biggest key for me is just finding pucks and making sure my feet are set. That kind of trickles down into everything else as far as moving around and rebound control and all that stuff."

Eric Staal and Jason Zucker each scored an empty-net goal for the Wild, who have won a season-best three straight.

Niederreiter broke Zucker's streak of six straight goals for Minnesota, one shy of the NHL record for consecutive goals scored by a player for one team.

"I told him I was sorry, but I'm glad someone else scored finally," Niederreiter said. "Obviously we want to score as many goals as possible and he got on the board late, which is good for him."

Brian Elliott made 17 saves for the Flyers, shut out for an NHL-high fifth time this season.

"We can't get scored on that early, first shift of the game," Elliott said. "They caught us maybe a little asleep to start and the first forecheck they create a chance like that and then we're fighting from behind. You don't want to do that, ever."

Staal won the initial faceoff and had possession of the puck on the left side when he centred to Niederreiter for a quick one-timer past Elliott. It was the fastest goal to start a home game in franchise history.

Niederreiter, who was playing in his 400th NHL game, missed six games earlier this season with a high ankle sprain but has three goals and three assists in eight games since returning.

"I'm glad somebody else scored," Wild coach Bruce Boudreau said. "All year we talk about we're not a one-man team. We don't have Wayne Gretzky out there, so we have to do everything by committee."

The Flyers have not scored in 156:09. Their top line of Claude Giroux, Sean Couturier and Jakub Voracek has combined for 23 goals — 46 per cent of the team's total.

Philadelphia was 0 for 2 on the power play and has converted only one time in its last 18 chances.

"In the second period we generated a lot of really good opportunities and came up empty-handed after that," coach Dave Hakstol said. "That can get frustrating for sure for the players, but you've got to keep a strong mental mindset and go back at it."

NOTES: Minnesota forward Charlie Coyle skated with the team for the first time since breaking his right fibula in a game on Oct. 12. Coyle has missed 14 games. ... Philadelphia rookie C Nolan Patrick practiced with teammates as he eyes a potential return on Thursday. Patrick, the No. 2 overall pick in this year's entry draft, has missed eight games with a concussion. ... Flyers D Mark Alt, a former high school and college player in Minnesota, was recalled from the AHL but was a healthy scratch. ... Ex-Minnesota North Stars forward Jack Carlson, who has been declared cancer-free after battling the disease, did the traditional "Let's play hockey" before the game on Hockey Fights Cancer Awareness Night.

Flyers: At the Winnipeg Jets on Thursday.