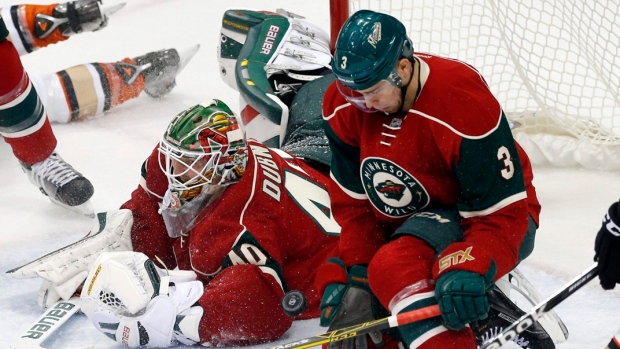 ST. PAUL, Minn. - Devan Dubnyk stopped 15 shots for his first shutout this season to lead the Minnesota Wild to a 3-0 victory over the reeling Anaheim Ducks on Saturday night.

Matt Dumba, Thomas Vanek and Ryan Carter scored to send Anaheim to its sixth loss in the first seven games.

The Ducks, last season's runner-up in the Western Conference finals, have scored just six goals this season while getting shut out four times.

Minnesota outshot Anaheim 15-3 in the first period and 26-9 after two. The Ducks were hanging around despite getting outplayed before they took four penalties in the first 11 minutes of the second period.

As Patrick Maroon skated out of the penalty box with 6:59 left in the second, Vanek ripped a shot past Frederik Andersen to give Minnesota a 2-0 lead.

With 1:35 left in the second, Carter took a pass from Justin Fontaine on a short-handed 2-on-1 rush to cap the scoring.

Dumba sent a shot over Andersen's right glove to give the Wild a 1-0 lead with 3:28 left in the first.

It was the first time the Wild beat the Ducks at home since Feb. 18, 2011. The Ducks had won 10 of their last 11 against Minnesota before this lacklustre performance.

Dubnyk spent long stretches between action on his end of the ice stretching to stay loose. The shutout was the 15th of his career and first since Feb. 20 of last season at Edmonton.

NOTES: Anaheim placed D Josh Manson on injured reserve with an unspecified upper-body injury and recalled D Joe Piskula from AHL San Diego before the game. ... The Wild recalled D Kurtis Gabriel from AHL Iowa. Gabriel did not dress on Saturday but could make his NHL debut on Sunday in Winnipeg.