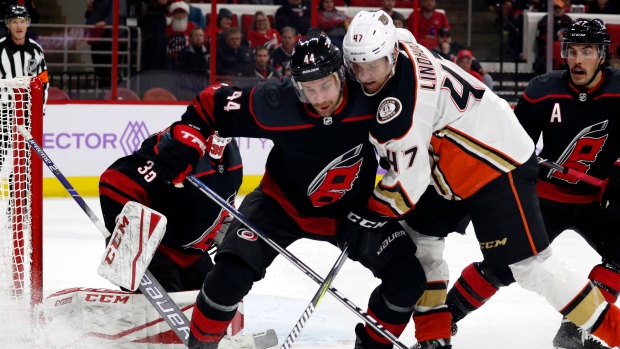 The NHL trade market appears to be heating up with the Anaheim Ducks and Carolina Hurricanes both looking to make moves to boost their lineups.

TSN Hockey Insider Darren Dreger reported Thursday that the Ducks are looking for a left-shot defenceman and noted the Hurricanes could make sense as a trade partner.

"Anaheim has been scouting teams like the Montreal Canadiens and Carolina Hurricanes," Dreger said on Insider Trading. "I wouldn't say that there's a connection there yet, but Anaheim is pretty specific with what they need. Worst-case scenario, they're looking for a third-pairing guy with a left shot."

Meanwhile, TSN Hockey Insider Pierre LeBrun reports the Carolina Hurricanes continue to look for scoring help as they rank second last in the NHL in goals for.

"Whether there's a fit with Anaheim or not, the Hurricanes - which really wanted William Nylander but never really got that shot - want a top-six forward ASAP and they've got the surplus on defence to make it happen." LeBrun said.

The Ducks currently do not have a player on their roster with 10 goals this season. October waiver claim Pontus Aberg leads the club with nine goals this season, while injured winger Micheal Ferland is Carolina's leading goal scorer with 11 this season.

Hurricanes general manager Don Waddell confirmed last month that he was interested in Nylander, who was then still unsigned by the Toronto Maple Leafs, noting his team was exploring all options for offensive help.

"It's reasonable in this effect, that we know we don't score goals," Waddell said on Nov. 15 of his team being linked to Nylander. "We've been in every hockey game this year. We've only had one game where we lost 3-0 where we didn't score. We've been talking to multiple teams about offensive players for that reason. So yes, as I'm sitting here in my chair today, any offensive player that might be available, we have to explore to every possibility to see if that would be a good fit for us and for the other team. "

The Hurricanes are 1-4 in their past five games and have been outscored 14-5 in that stretch. The team sits 12th in the Eastern Conference, four points back of the final wild-card spot.

Anaheim (15-10-5) has won five straight games and sit second in the Pacific Division, three points behind the Calgary Flames.