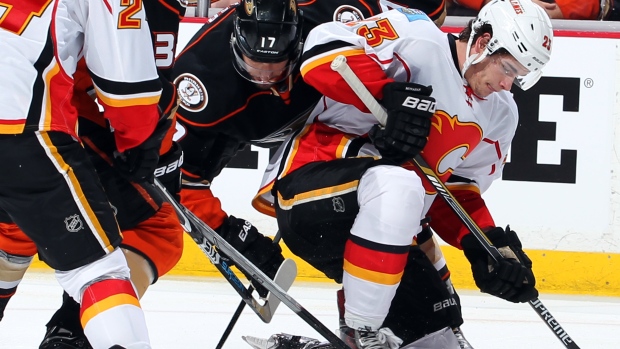 In early February, I wrote an article at TSN outlining why I thought the Anaheim Ducks were primed for a deep playoff run. The argument had two principal components. One, the road – by virtue of the new playoff format and Los Angeles’ regular season struggles – appeared significantly easier compared to years past. Two, the team had legitimately improved under Bruce Boudreau’s watch.

The Calgary Flames are getting quite the presentation of the second part of that sentence. Calgary’s not the first team to drop two games in a best-of-seven series, but the discouraging part is that neither game was particularly close. Calgary spent shift after shift defending a relentless wave of Anaheim attacks, and even when the pressure lifted, the Flames could never really flip the ice and sustain offensive zone pressure.

One of the big reasons why Calgary has had such a problem against Anaheim has to do with the Ducks’ newfound depth – an element the organization didn’t really possess just a few years ago. The forward crop has been lined with young, cheap talent, and the blueline has been bolstered with a slew of talented puck-movers who can jump-start the attack.

Perhaps the most interesting addition, though, has been that of Ryan Kesler.

Acquired via trade with Vancouver in the summer of 2014, Anaheim brought in Kesler to ease some of the burden off of the Anaheim top line. The working theory was that Kesler and a couple of talented wingers would create a pseudo-checking line – one that mitigated offensive production from the opposition, allowing the Getzlaf group to run wild on others.

It’s no surprise that, through the first two games of the Calgary/Anaheim series, Bruce Boudreau has leaned heavily on the Kesler trio to suppress the number of offensive chances for Calgary’s vaunted Sean Monahan line, which has regularly featured Jiri Hudler and, to a lesser extent, Johnny Gaudreau/David Wolf. On the road, they couldn’t get away from the Kesler group.

Below, a quick visualization of the competition Sean Monahan saw in the first two games of the series. For the sake of this piece, we’ll limit it to forwards – I already ran the numbers on defensive match-ups, and Monahan saw a pretty even spread of Anaheim’s pairings. 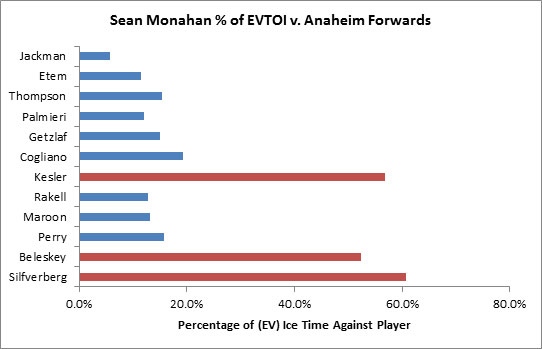 Not every coach in today’s NHL line-matches that aggressively – some are comfortable going power against power. In Bruce Boudreau’s case, I think the above graph is pretty compelling. Three of every five Sean Monahan shifts saw the trio of Ryan Kesler, Matt Beleskey, and Jakob Silfverberg coming over the boards, paving the way for Anaheim’s top line to get away from the speed and scoring ability in Calgary’s top group.

The story of the Calgary Flames as a collective group is as obvious on the score sheet as it is in the underlying numbers. They were out-scored 9-1 in two games at the Honda Center, and the even-strength numbers in particular were gory. Anaheim finished ahead 6-1 in goals, 94-78 in shot-attempts (score-adjusted), and 44-28 in scoring chances (score-adjusted).

As you may have expected, a lot of that had to do with the Sean Monahan line being taken entirely out of the game. Via resources at War on Ice and DataRink, we can see how Monahan fared against each common opponent from a shot-differential viewpoint. And, for context, we can see how who between Monahan and the Anaheim forward in question saw the favourable number of offensive zone starts in their head-to-head match-up. 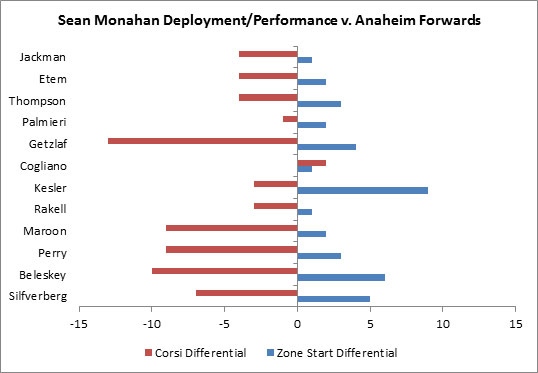 These numbers are troubling. Monahan’s line had lofty deployment through both of the games, as noted in the blue bars – in basically every head-to-head match-up, Monahan saw the more favourable number of offensive zone starts. And yet, other than Andrew Cogliano, every Ducks player won the head-to-head match-up from a shot differential standpoint.

Two items worth noting: Kesler’s line got the better of Sean Monahan’s line despite starting their shift in the defensive zone 9 more times. And, Getzlaf’s line – who didn’t play a ton against Monahan’s line – just destroyed that group in limited action. Getzlaf, specifically, had a perfect 13-0 Corsi differential head-to-head with Monahan.

Here’s what you need to figure out if you are Bob Hartley. The Monahan line didn’t have success against Kesler even in circumstances where success seemed more realizable. The Monahan line, in a pretty limited sample, had no chance against the Getzlaf group. Do you keep going to the well and hope that the Monahan line figures out how to use their speed to their advantage, or do you split up the line combinations in an attempt to spread talent through the roster, getting out of this match-up nightmare?

Home ice will help regardless of what Bob Hartley decides and, it’s starting to appear that Calgary’s going to need a lot more than the benefit of last change to win this series.