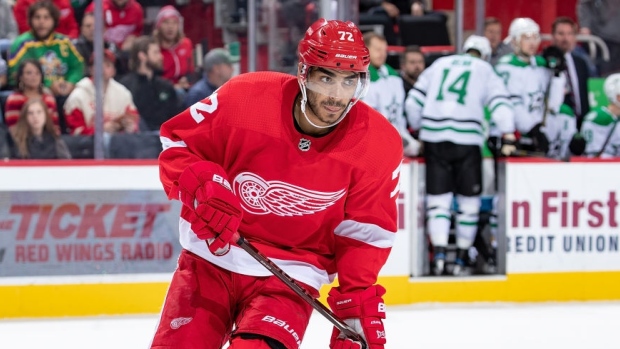 The 25-year-old Athanasiou has 10 goals and 24 points in 46 games to go along with a league-worst minus-45 rating this season.

The move reunites Athanasiou with Oilers general manager Ken Holland, who drafted the Woodbridge, Ont., native 110th overall in 2012 when he was GM in Detroit.

Edmonton also acquired defenceman Mike Green from the Red Wings earlier Monday, then shipped a fifth-round pick in 2021 to the Ottawa Senators for winger Tyler Ennis.

In another move, the Oilers dealt defenceman Joel Persson to the Anaheim Ducks for goalie Angus Redmond and a conditional 2022 seventh-round pick.

The speedster added one goal in five playoff contests, and could find himself parachuted onto a line with Oilers captain Connor McDavid in Edmonton.

The Oilers will retain 10 per cent of Gagner's US$3.15-million salary. The 30-year-old can become an unrestricted free agent this summer.

The trade between Edmonton and Detroit for Athanasiou was the second between the clubs in less than 12 hours ahead of Monday's 3 p.m. ET deadline after the Oilers acquired the 34-year-old Green for a conditional fourth-round pick in 2020.

Edmonton (33-22-7) currently sits second in the Pacific Division with 73 points, three back of the Vegas Golden Knights for first, but also just three points up on the Arizona Coyotes for the second wild-card spot in the Western Conference.

Detroit (15-45-4), which is in full rebuild mode, became the first team to be eliminated from playoff contention before the trade deadline since the 2003-04 Pittsburgh Penguins on Friday.

Gagner had five goals and 12 points in 36 games with the Oilers this season.