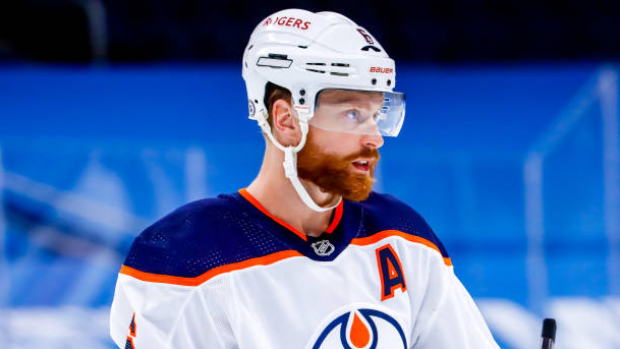 It appears the Edmonton Oilers will be able to keep at least one of their pending free-agent defencemen off the market this summer.

According to TSN Senior Hockey Reporter Frank Seravalli, the Oilers are making progress on a contract extension for defenceman Adam Larsson.

"The Oilers have three players in the top-13 of the Free Agent Frenzy Rankings, so lots of work ahead for general manager Ken Holland," Seravalli said Thursday on Insider Trading. "No update at this point on Ryan Nugent-Hopkins, there's nothing new there yet on those extension talks.

"However, the Oilers have made progress with defenceman Adam Larsson and his camp on a possible extension. It's not imminent and won't happen before the puck drops in the Stanley Cup playoffs, but I think at this point it's fair to say that both sides are optimistic that a deal could be had once the playoffs wrap up, likely in the three- to four-year range."

Listed at No. 13 among TSN Hockey’s Top 30 free agents this summer, Larsson has three goals and nine points in 55 games this season while averaging 19:45 of ice time.

Acquired in 2016 from the New Jersey Devils for Taylor Hall, Larsson has 15 goals and 67 points in 328 games since joining the Oilers. He has 24 goals and 136 points in 602 career NHL games between the Devils and Oilers.