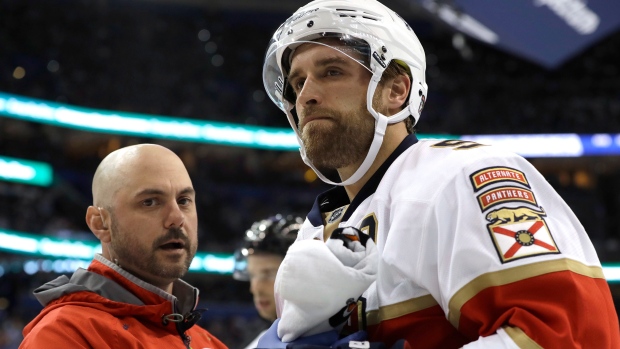 Aaron Ekblad revealed Friday he sustained a broken nose when he was punched by Montreal Canadiens forward Max Domi on Wednesday night.

The Florida Panthers defenceman said he doesn't believe Domi’s suspension for the remainder of the preseason fits the crime and vowed that there would be revenge in the future.

“It’s kind of a gift... I don’t want to comment too much on the league’s decision, but I think it’s wrong," Ekblad told the Panthers’ website. "That’s life, though."

"It’s dumb. I think he’s stupid for doing it," Ekblad continued. "In the end it’s hockey. That’s the way it goes. Scores will get settled at a later date.”

Ekblad on Domi incident: “It’s dumb. I think he’s stupid for doing it. In the end it’s hockey. That’s the way it goes, scores will get settled at a later date.” pic.twitter.com/3ClZ3W2JXJ

Domi received a five-game preseason suspension for the punch and, while Ekblad was removed by the NHL from the game, he passed the concussion protocol that night. Asked if he was worried about sustaining a concussion, Ekblad responded, "It was fine."

The sucker punch, which was preceded by three rabbit punches to Ekblad's face, didn't sit well with the Panthers after Wednesday's game.

"Bit of a gutless play. You don't do those types of things," Panthers goaltender Roberto Luongo said after the Panthers' 5-2 win. "I'm sure the league will look at it and we definitely won't forget about it.

"You don't do that. You respect your opponents and if your opponent doesn't want to engage in a fight, there's no reason to drop your glove and punch him square in the face."

The Panthers will host the Canadiens on Dec. 28 in the first meeting of the regular season between the two teams.