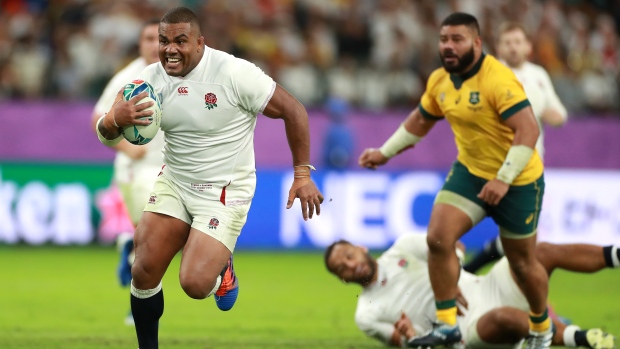 OITA, Japan (AP) — The strains of English rugby anthem “Swing Low, Sweet Chariot” were already triumphantly swirling around Oita Stadium when Anthony Watson intercepted a long pass out wide and bounded over for England’s fourth try that clinched a record-tying win over Australia.

A 40-16 victory. A place in the Rugby World Cup semifinals. An unprecedented seven straight wins over its bitter rival.

For England and its jubilant fans, days do not get much better than this.

Making it worse for the Wallabies, an Australian masterminded the entire thing.

“At this moment,” said England coach Eddie Jones, when asked if he had any sympathy for his native country, “there’s not a lot of sympathy. No.”

A humiliating 33-13 loss to Australia at the 2015 World Cup contributed to England’s pool-stage exit in the tournament it was hosting and led to the hiring of Jones, who was tasked with getting the world’s wealthiest rugby union back on track.

This was the biggest game of his tenure and he nailed it.

Strong in defense and clinical in attack, England scored four tries to one and displayed the kind of mental resilience the team has lacked in recent years under Jones.

Australia, which led 3-0 after a dominant first 15 minutes, reduced the deficit to 17-16 with a converted try soon after halftime. England responded with 10 points in the next five minutes in a game-defining period.

“The boys were calm and in control,” England captain Owen Farrell said. “We said it wasn’t about what happened but what’s going to happen next.”

Next for England is a semifinal match against New Zealand, the defending champion and the world’s top-ranked team, in Yokohama.

It’s less clear for the Australians and their coach, Michael Cheika.

“It’s a cruel world when you are being asked those questions two minutes after being knocked out of a World Cup,” Cheika said, responding to a question about his future.

“When the time comes, I’ll tell them,” Cheika said. “They don’t need to know today.”

The Wallabies failed to reach the semifinals for only the third time in nine editions of the World Cup, and each of their quarterfinal losses have come against England.

Indeed, the English are going through a period of unprecedented dominance over their old foes, having won their last seven matches against Australia since the 2015 World Cup.

This latest win equaled the record margin of victory — 24 points — which also came under Jones, a 30-6 win in 2017 at Twickenham.

It will go down as one of England’s best World Cup performances.

Winger Jonny May, making his 50th international appearance, scored two tries in a three-minute span midway through the first half to put the English 14-3 ahead. It was a lead they never lost despite it being trimmed to one point soon by Australia winger Marika Koroibete’s solo try from halfway in the 43rd minute.

May’s second score came following an interception by England center Henry Slade on his own 22. Slade, a hotly debated pick ahead of George Ford, raced 40 meters forward and then executed a perfect grubber kick to his left that May gathered on the run before finding the left corner.

England led 17-9 at halftime and found its lead trimmed to one point by Koroibete’s try. The response was emphatic.

Three minutes later, Farrell’s flat pass sent in Kyle Sinckler, who cut a great angle to split the defensive line, and a wide smile appeared on the prop’s face well before he had crossed the line.

“He’s like a runaway rhino,” a smiling Jones said.

Farrell converted and added a penalty soon after, restoring England’s lead to 11 points at 27-16.

Sinckler made just as big a contribution in defense, stripping the ball away when Australia was within two meters of the line after turning down an easy shot at goal.

That was realistically it for Australia, and Kurtley Beale’s long pass — intercepted by Watson for the fourth try in the 76th — was the end for the Wallabies in Japan.

England scored 23 unanswered points in the final 34 minutes. Farrell finished with 20 points, successful with all eight of his kicks.

“The challenge is there’s always a better samurai around the corner,” Jones said, looking ahead to the meeting with New Zealand. “The semifinals are always the toughest game of the tournament because you have two teams desperate to get to the final.

“Our challenge now is to find ways to get better.”